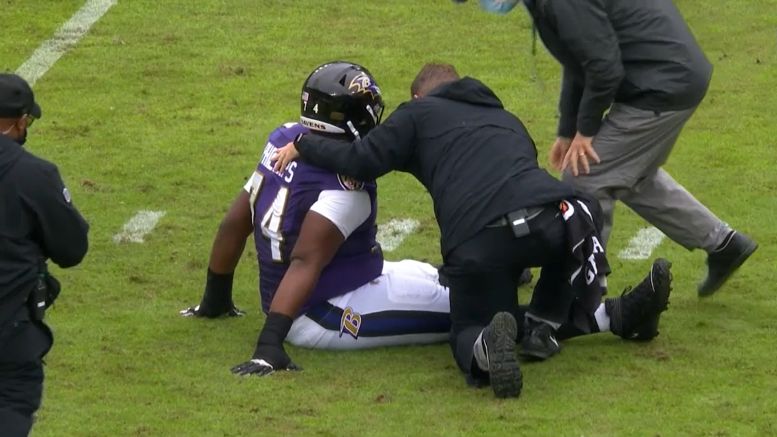 The Baltimore Ravens entered the 2021 season returning just one offensive lineman to his usual spot, that being Ronnie Stanley at left tackle, who suffered a torn ACL in the middle of last season. Two starters were added via free agency, while two others either moved to a new position or graduated from a reserve.

The latter was Tyre Phillips, a second-year former third-round draft pick out of Mississippi State. He did start eight games as a rookie last season, at right guard, but it was initially anticipated that rookie Ben Cleveland would win the left guard job this year.

Phillips was placed on the Reserve/Injured List yesterday, their sixth starter to go down already this season; however, that does not mean that he will miss the rest of the season. The Ravens have not updated the severity or nature of his injury, but he will miss at least the next three games.

The second-year player went down with a knee injury in the Ravens’ season opener against the Las Vegas Raiders on Monday night, in what ultimately proved to be a losing effort. He was replaced by Ben Powers, with Cleveland being a healthy scratch, but Cleveland may take over the starting job.

Among the other players that Baltimore has placed on the Reserve/Injured List recently are running backs J.K. Dobbins and Gus Edwards, cornerback Marcus Peters, linebacker L.J. Fort, and wide receivers Miles Boykin and Rashod Bateman, the latter their rookie first-round pick. Some, like the receivers, are expected back this year, sooner rather than later. The others have suffered season-ending injuries.

In addition to Dobbins and Edwards, the Ravens also lost Justice Hill at the running back position, which left them with first-year Ty’Son Williams as their starter on Monday night, though he played reasonably well, including a 35-yard touchdown run. Trenton Cannon was on the gameday roster and also scored, but has already been released. Le’Veon Bell and Devontae Freeman are likely to be called up from the practice squad this week.

As for the offensive line, one of the Bens figures to take over at left guard, neither of whom have starting experience. Patrick Mekari is also on the roster, but is better at center than guard. Trystan Colon, a 2020 undrafted rookie, is listed as their number two center behind Bradley Bozeman, who up until this year was their left guard.

At the moment, they only have eight offensive linemen on the 53-man roster, and Phillips was actually listed as their backup right tackle, with Mekari also listed as a backup on the left side. They have one tackle, Adrian Ealy, an undrafted rookie, on the practice squad.