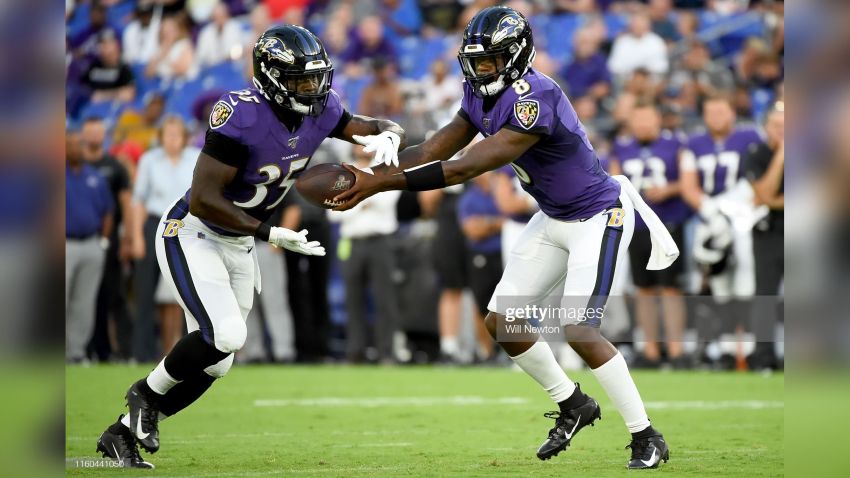 I’m not sure who walked under a ladder or broke a mirror or spilled the salt, but the Baltimore Ravens are falling apart. After losing RBs J.K. Dobbins and Justice Hill to season-ending injuries, the team may also be without two more key starters, including starting RB Gus Edwards.

According to NFL Network’s Ian Rapoport, Edwards and CB Marcus Peters not only sustained “potentially significant” injuries Sunday, it happened on back-to-back plays. Their injuries forced the Ravens to cancel the remainder of today’s practice.

The #Ravens cut short practice today after CB Marcus Peters and RB Gus Edwards sustained potentially significant knee injuries on back-to-back plays, per me and @MikeGarafolo. The team is having tests done on both players.

Rapoport followed up to say both are being evaluated for torn ACLs.

The concern for both players — Marcus Peters and Gus Edwards — is a torn ACL, sources say. They both will have tests to confirm. Just terrible. https://t.co/K9GpDU0SI7

Dobbins was lost in the preseason to a knee injury, while Hill tore his Achilles a week later. Edwards was slated to become the Ravens’ key cog in the run game, a proven rusher already, but now his status is in doubt. Last season, Edwards rushed for 723 yards and averaged five yards per carry. In two games versus the Steelers, he ran for 97 yards and a pair of scores.

Peters has been among the better cornerbacks in football and made up a quality duo with Marlon Humphrey. In 14 starts last season, Peters intercepted four passes. He’s picked off seven balls in 23 starts as a Raven, traded over from the Los Angeles Rams during the 2019 season.

Baltimore, one of the favorites to win the AFC North, has been ravaged by injury already in addition to changes along the offensive line, like trading away stud right tackle Orlando Brown Jr. to the Kansas City Chiefs this offseason. The Ravens still have Lamar Jackson and a good run scheme, but there’s a limit of how many injuries one team can suffer. Replacing Edwards includes Ty’Son Williams, Trenton Cannon, and yes, Le’Veon Bell, signed to the practice squad days ago.

Pittsburgh and Baltimore will meet in Week 13 and again in the Week 18 regular season finale.