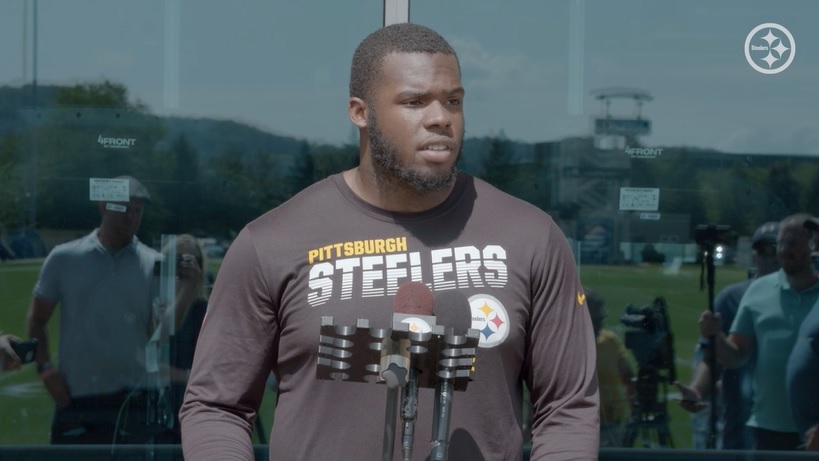 For some players, the head coach or general manager lets the player know he’s made the team. Or maybe his positional coach. For some, the way they found out is by not hearing anything. No one tells them to bring their playbook, no news is good news, and they never get that pink slip.

Pressley Harvin III was told me made the team. But not by a coach. It came from the guy he was competing against – Jordan Berry, who the Steelers released at final cutdowns.

“It was last week, Monday,” he told reporters via Steelers.com. “Found out in a weird way, but a respectable way. Actually Jordan Berry was the one that told me. It was right after practice. He just came up to me and he told me, I got the job. Just continued to tell me, it was just kinda like passing the torch.”

Harvin and Berry were in a close battle all summer long. Harvin had the benefit of being the draft pick but that didn’t ensure him his roster spot; after all, the Steelers cut a 6th round long snapper just a few years ago. Harvin was a bit inconsistent but his highs were simply better than Berry’s, especially with several elite hangtimes, and he was a good enough holder to be the Steelers’ guy.

As he’s done since being drafted, Harvin praised Berry for helping him out, even if it ultimately meant taking his job.

“Berry’s a really good guy. I appreciate them for everything. And I’m excited at the fact I still get to play against him.”

Berry wasn’t out of a job for long, signing with the Minnesota Vikings days after getting cut by Pittsburgh. Assuming both remain on the roster, Harvin and Berry will meet again Week 14 when the two teams play each other.

Harvin went as far as to say he’s never had a person, teammate or coach, help him as much as Berry did.

“Jordan has my utmost respect. Because he was by far the biggest help I’ve had in my career since I started punting in my honest opinion. Not to bash my coaches or anything because they’ve been a big help too. But to be on this stage and having someone trying to help, instead of being in here by yourself everyday trying to do it is a big difference of, how can you develop yourself, if not develop yourself a little bit faster. I got the utmost respect for Berry. He’s a really good guy and I still talk to him to this day, man. I got love for him.”

Fans love the draft. So do coaches. Veterans hate them. For them, all it means is a new group of guys threatening and taking jobs. I’m sure many players have given rookies a cold shoulder, unwilling to help and give the guy they’re battling with any sort of edge. But Berry, as Danny Smith praised him for, was a true professional. And though Berry’s time in Pittsburgh appears over, both guys will be punting in the NFL this weekend. That’s pretty special.