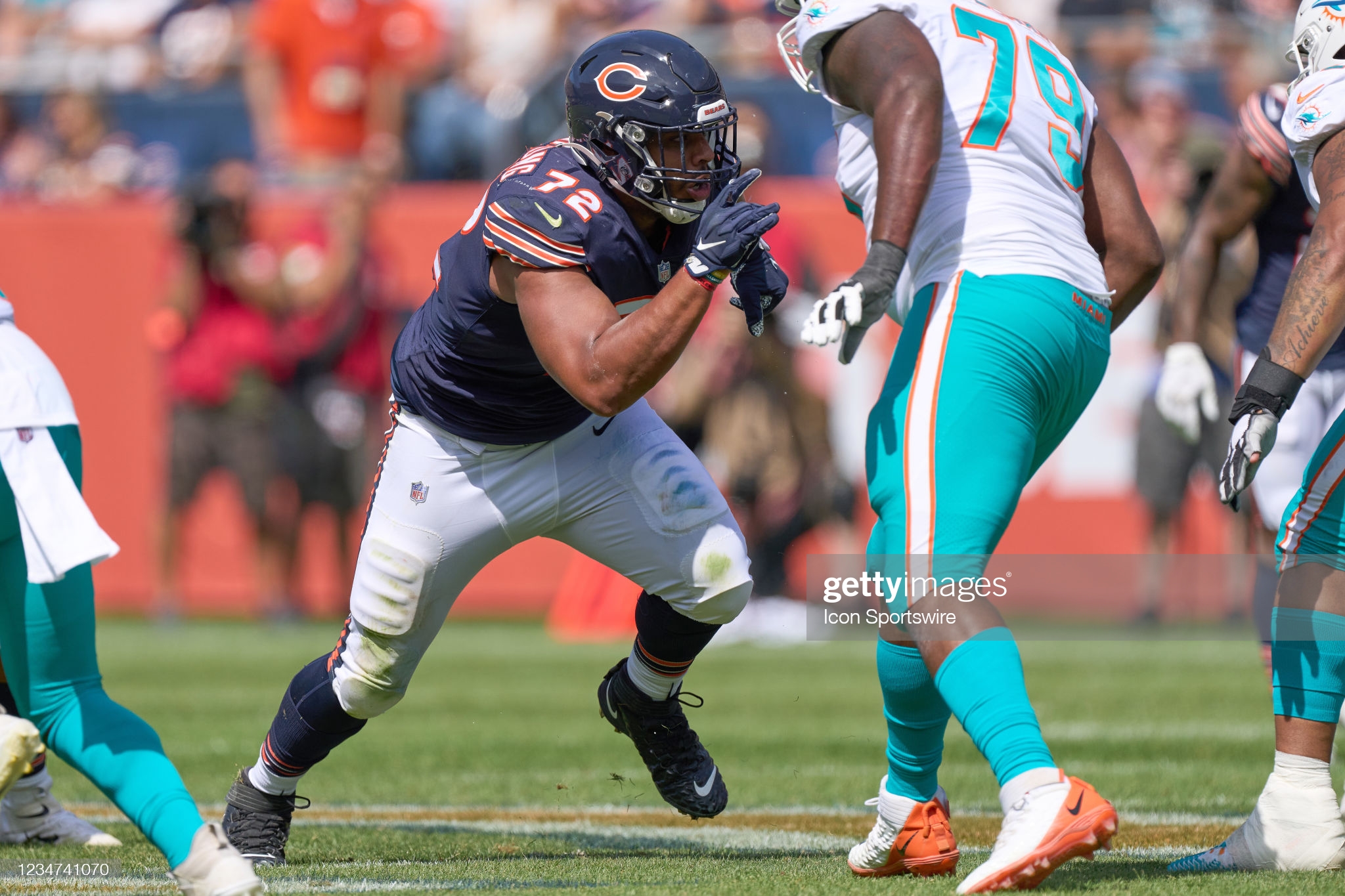 Despite being the biggest player of the four, defensive lineman Daniel Archibong was one of the least-known of the group. The 2021 undrafted free agent out of Temple spent the last months with the Chicago Bears, impressing in flashes during the preseason. Let’s take a look at what Archibong brings to the Steelers’ practice squad, viewing his performance against NFL competition this preseason.

Archibong is tall, even for a defensive lineman, and has the strength that goes along with being larger than the norm. That is one of the first traits he displays in-game. He may not always win or manhandle his blockers, but it is rare you see Archibong get bullied or driven away outright by an offensive lineman.

Where he displays that most is when he is rushing the passer, an area of his game that is further ahead than his work in run defense. Archibong won’t lose strength battles coming off the line, and keeps himself low despite his height to avoid getting stood up quickly. Watch him here, against the Dolphins in the preseason opener. Matched up with the left guard, Archibong is off the line and driving forward immediately, steadily walking the blocker back into his quarterback and putting a timer on how long Jacoby Brissett has to make a throw.

It’s not often he is so dominant in marching a blocker backward, but Archibong keeps that effort up in the pass rush. The longer a play goes on and the QB stays in the pocket, the bigger an advantage Archibong gets, like on another play against the Dolphins where he again faces the left guard. The blocker stalls him out initially, but as Jacoby Brissett gets tied up in the pocket, Archibong sees an advantage, tosses his man aside, and gets in Brissett’s face to contest the pass.

Archibong packs a mean punch when he stays low off the line and drives upward, and that is how he generates a lot of his positive reps as seen above. When he doesn’t get that early punch, reps don’t go as well for him. Against the Buffalo Bills, Archibong gets stonewalled immediately by the left guard and center, with the guard peeling off after the initial contact. The center has no problems maintaining the advantage one-on-one, not manhandling the Bears’ lineman, but keeping him from getting any momentum built up.

Even in situations like the one above, Archibong has multiple pass rush moves he can deliver suddenly that will shed him of his blocker, specifically swim and rip moves that he favors. His issue is that he waits far too long to deliver those moves, giving the QB ample time to escape the pocket or get a throw off before Archibong can make an impact. One of his biggest areas to improve is making an impact much earlier on plays, and not limiting his splash plays to snaps where the QB spends a long time in the pocket.

Here is an example that shows how quickly Archibong can get free, but how long he waits to do so. Against the Titans and going up again against the left guard, Archibong gets an initial drive, but lets the Tennessee blocker stall him out before he delivers a move to get by and to the backfield. Archibong has to get to those moves quicker, and chain them together with his early rush so he can affect plays quicker.

Archibong is a work in progress as an NFL run defender, who shows a foundation that can be built upon by the Steelers coaches. He again uses his strength to clog lanes, and when he gets contact with a runner, the play rarely progresses more than an additional yard or two before stopping. He is able to tie players up and wait for help to arrive to get on the pile and finish them off.

Here he is at his best, against Tennessee. He doesn’t get free of his blocker, but uses his strength advantage to drive him in the direction of the run, causing the back to literally run into them. There, Archibong absorbs the impact and stands strong as his teammates arrive to pile on and end the down.

One issue that he shows consistently on film is not keeping himself in position to make those plays. Archibong has a tendency to get too far left/right to try and get ahead of the play when teammates are already out in front. In doing so, that leaves counter lanes wide open for backs to hit.

Archibong showed some improvement in that regard over the course of the preseason. Once again in the finale against Tennessee, he gets free and begins following the pile right, but instead of going full speed in that direction, he rips away from the right tackle and stops directly ahead of the runner countering back to his right, making the tackle. In his earlier preseason reps, Archibong would continue on and leave that lane open, or as the play develops in the backfield get out ahead to the outside instead of staying at home in the middle.

One area his game deserves only positive credit is in the open field. Archibong is not an elite athlete by any means, but for his size is not a liability when not engaged with a blocker. He stays centered on plays, and can handle providing defense early on during screen passes, even against receivers. Here against the Bills, Buffalo hits a quick WR screen to the left side. Archibong moves himself in that direction while staying positioned to defend a cut back to the middle. When the receiver does, he is there and makes the appropriate cut himself to stop his momentum and make the tackle.

Archibong is a defensive lineman with some promise, and goes from one team with defensive line depth to another in trading Chicago for Pittsburgh. He faces even longer odds with the Steelers of making the active roster, with the team already electing to keep eight D-Linemen on the 53-man to begin the season. He has some traits the Steelers like in their defensive tackles, and it’s not hard to imagine him sticking around the full season and getting a shot at making the roster next fall, given the work the Steeler coaches have done with linemen like Henry Mondeaux, Isaiah Buggs, and Carlos Davis. His size and strength are major assets to his game, he just needs some coaching to get his overall performance to make a jump forward, and get him making a more consistent impact on plays.