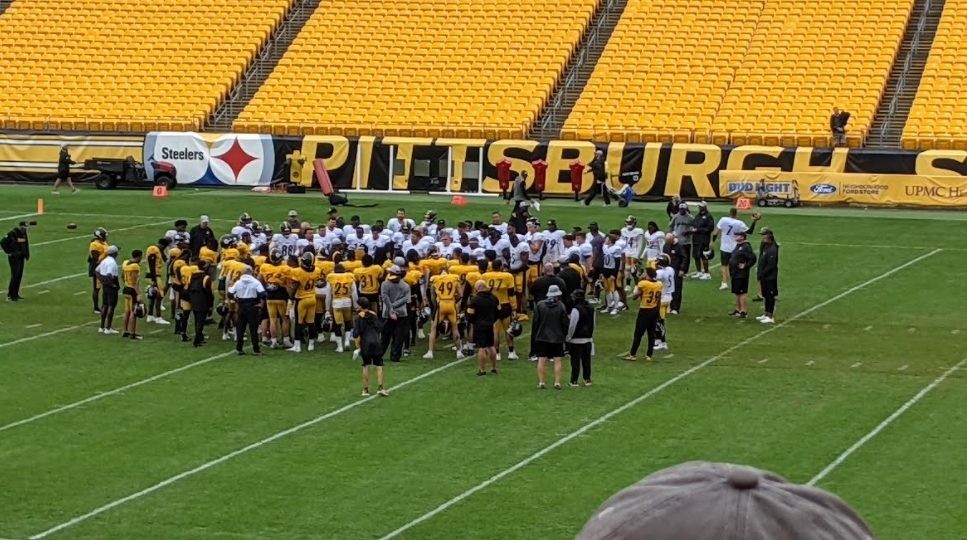 HOW WAS 2021 STEELERS ROSTER BUILT?

A few weeks ago, I wrote about former Steelers around the league in 2021. That got me to thinking, how is the Steelers 2021 roster built? Where did the players come from? The Pittsburgh Steelers has a reputation of building their roster through the draft and developing their own players. Is that still true?

EASIER FOR STEELERS BACK IN THE DAY

Prior to the NFL salary cap and resulting roster turnover in free agency in 1994, it was easier for teams to retain players on their rosters. In fact, the 1979 Pittsburgh Steelers roster includes 46 players who played at least one game in the season the Steelers won their fourth Lombardi Trophy. The Steelers drafted 40 of those 46 players and signed all six of the undrafted free agents out of college. Notably Donnie Shell in 1974. Chuck Noll and the Pittsburgh Steelers had a roster that was 100% homegrown talent. Not a single player drafted or acquired from another NFL team not even undrafted castoffs.

Here is a snapshot of that roster from the Pro Football Reference: 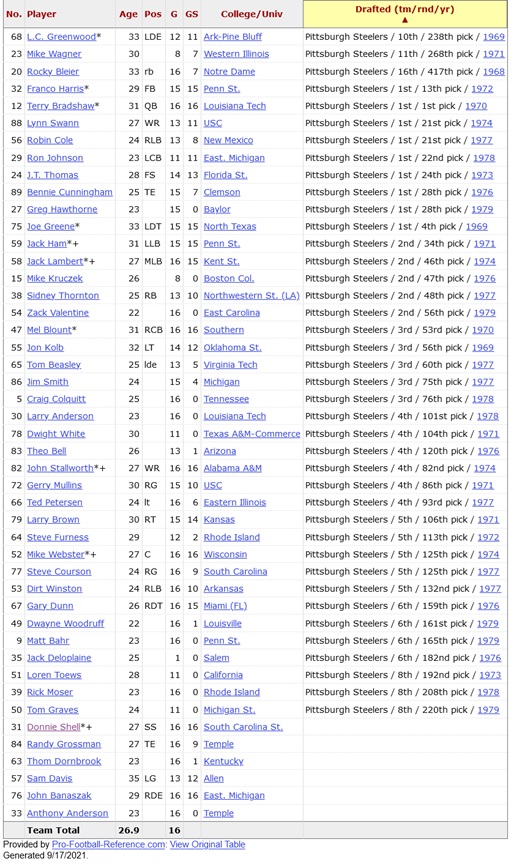 Most of yinz weren’t even born in 1979. So, lets fast forward to 2021. I’ve included a the 53-man roster plus the three players eligible for reinstatement from the injured reserve list. First, we have more players to choose from. By the end of the season, it won’t be surprising to see nearly 70 players eventually playing at least one game wearing the Black and Gold in 2021.

On the table that follows, I count 31 players the Steelers drafted plus one they signed as an UDFA. So, just over 57% are homegrown talent with the rest of the roster players drafted or signed by different teams. The last column lists the last NFL team the player was with before coming to the Steelers. The Los Angeles Chargers with four and the Jacksonville Jaguars with three seem to be the favored fishing grounds for the Steelers to look for outside talent. Another interesting factoid is that 14 of the 56 listed Steelers played their college football at four schools. Alabama and Wisconsin with four. Michigan and Notre Dame with three.

The Steelers organization has adapted as the balance of power between owners and players has shifted towards more equitable distribution of revenue and ability to move between teams.

The Steelers ability to remain competitive year after year is remarkable due to the higher volatility of player turnover. Maintaining a team environment that attracts and retains players is key. Mike Tomlin’s ability to foster good relations as a “player’s coach” while balancing the team culture that the Rooney family embodies is incredibly special that most other NFL teams do not possess.

I always like to offer a music selection. We always want our team to win championships. It’s easy to get frustrated when they don’t. But don’t forget The Way We Were by Barbra Streisand