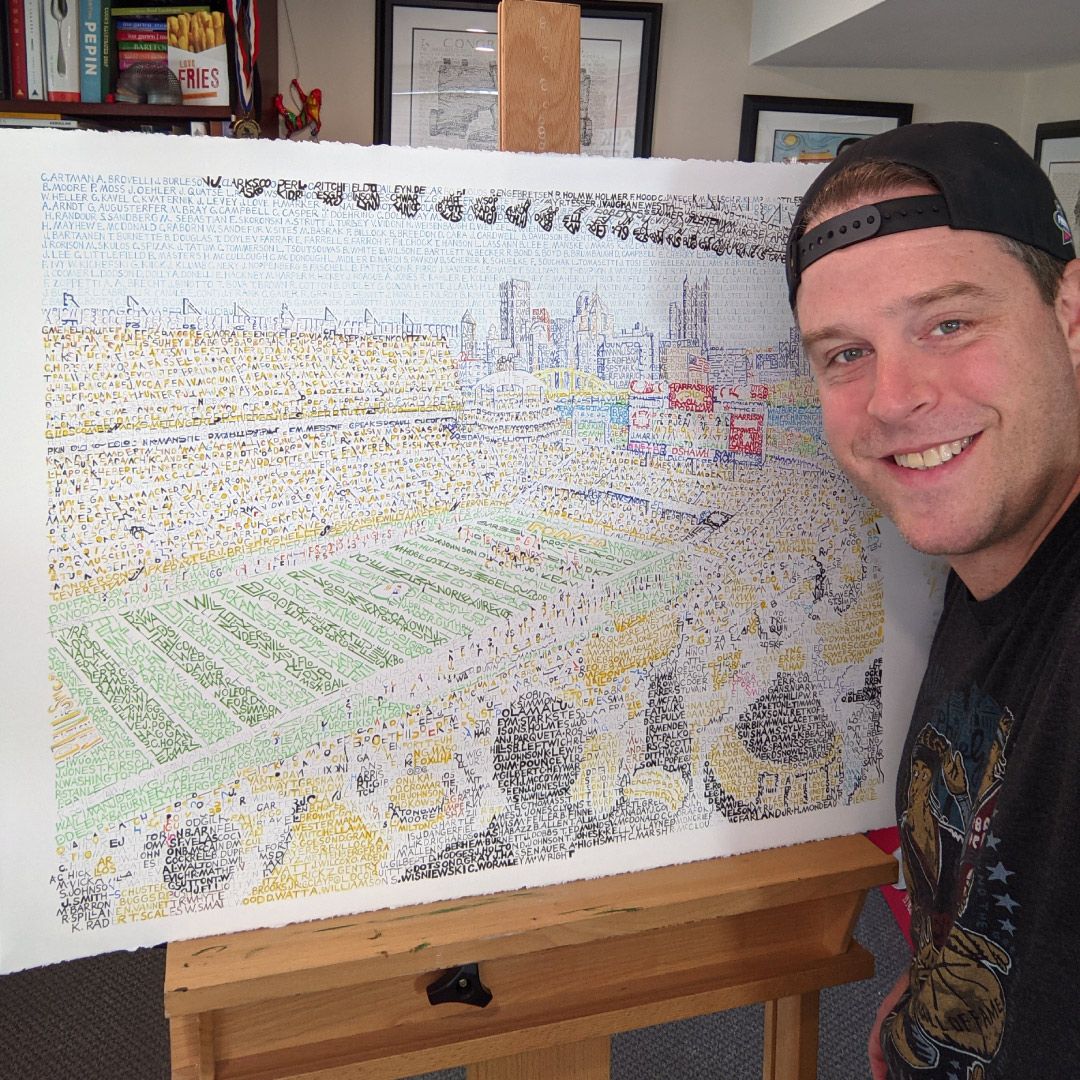 What’s in a name?

An entire piece of word art, for Pennsylvania artist Daniel Duffy at least.

Duffy, a Philadelphia native and an Indiana University of Pennsylvania graduate, completed a word art piece earlier this week highlighting Heinz Field using all 1,608 names of Steelers players in franchise history, all the way through the 2020 season.

Duffy spent roughly 150 hours on all facets of the piece including research, sketching, writing, and coloring before finishing the piece featuring a total of 13,596 tiny letters on August 30.

Excited to finally present…Heinz Field! Handwritten with the names of every Steelers player in history. 1,608 names to be exact, created out of 13,596 tiny letters👇 pic.twitter.com/kVJRzqEBQ7

An avid sports fan, Duffy originally started dabbling in word art with baseball, creating pieces featuring the Road to the World Series for teams from specific seasons, including the 1960 Pittsburgh Pirates and the 1979 “We Are Family” World Champion Pirates. Just recently, Duffy — a licensed baseball artist — started focusing on football, completing word art pieces for the Philadelphia Eagles and Kansas City Chiefs after those two franchises won Super Bowls.

Now, he’s focusing on anniversaries, starting with the 20th anniversary of Heinz Field, leading to the inspiration behind his piece.

“I really just started looking for anniversaries, and found that this was the 20th anniversary of Heinz Field,” Duffy told Steelers Depot Thursday. “This piece is the third all-time roster I’ve done in football, and I wanted to make sure I really captured the essence of Pittsburgh in this piece.”

The piece, which looks down at the point from the nosebleeds of Heinz Field, is set in the fall, allowing Duffy to add in a number of different colors to add life to the piece. One hundred and fifty hours later, he’s pretty pleased with how it’s turned out and what the reaction has been like to his Steelers’ masterpiece.

“It’s been crazy so far,” Duffy said. “It’s just been so cool. I always tell other artists that the hardest thing is for an artist to make art, but for me struggle has been how to sell art. If I ever see a young artist, I tell them that true art is selling the thing. So far, this piece has done really well and people seem to love it, which makes all that time and effort put into it worth it.

“This isn’t necessarily verbatim from one single photo; it involves hundreds of different photos from around the stadium,” Duffy added. “I looked from every angle, including fans walking into stadium, but knew I wanted to get the skyline in there. I remember when I’ve gone to games, I’ve taken the “T”, so I wanted to try and get those hills in there and make sure it’s fall to get the different colors in there, with the bridge and the two rivers. The skyline is by far my favorite part of the piece. I was so petrified that when you spend so much time on something like this, that it won’t turn out well. Some pieces that happens with, once I knew it was looking good, I wanted to dive in a little deeper.”

In the end, Duffy ended up spending the entire month of August creating the special piece of Steelers’ history.

With the Steelers having such a long, illustrious history, Duffy had to adjust his piece some compared to others. In the Heinz Field piece, Duffy used the players’ first initial and last name to allow for space, and included just one non-player name in the entire piece. That name? The Chief, Arthur Joseph Rooney Sr. He can be found somewhere in the piece listed as “The Chief”.

“Younger and older fans can spend hours finding their favorite players and recounting their best memories of Steelers football,” Duffy said. “This piece is just the next step in his ultimate goal of recreating every major stadium in history. This is for my friends and family that have been badgering me for a dozen years to do a Steelers piece. Even though there’s an east/west PA rivalry, I went to school at IUP and have family from South Park and there’s no doubt that the ‘Burgh has great fans.”

Though the original piece Duffy created is not for sale, he is selling prints of the Heinz Field word art in hopes of raising money for the ALS Association. His company, Art of Words, donates a portion of proceeds from all artwork sales directly to charity. For more info on this illustration, Art of Words and the charities they support, visit www.artofwords.com.