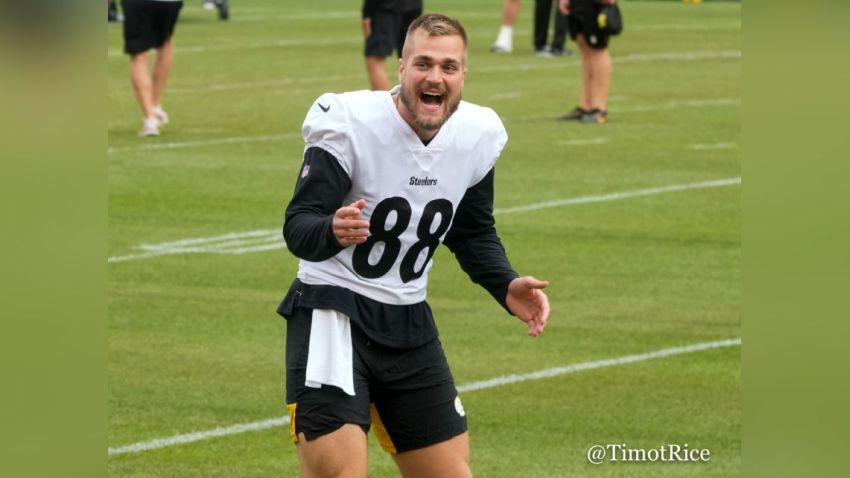 It was the prevailing assumption as soon as he was drafted that rookie Pat Freiermuth would, at some point, being the starting tight end for the Pittsburgh Steelers. Not many expected that he would be named co-starter right out of the gate.

“I love going away and playing in away stadiums. That’s something I thrive on”, the second-round pick told reporters on Wednesday. “I think most of my best games in college were at away venues, so I love it. I love when the crowd is booing me and throwing stuff at us and all that kind of stuff. I love it”.

Freiermuth’s best game out of the four in which he played in 2020 did indeed come on the road against Nebraska, hauling in seven passes for a career-high 113 yards. He also had a 101-yard game in 2019 in Minnesota, and a three-touchdown performance on Michigan State’s field.

His only multiple-score game in his first season in 2018 game in New Jersey against Rutgers among his three catches in the game for 47 yards. It was also the second-most yards he had in a game that year, the most being 51 yards in Michigan.

Freiermuth, then, certainly isn’t lying when he says some of his best games have come on the road, and thus we can probably take him at his word when he says that he enjoys the atmosphere. Playing in Buffalo with the Bills Mafia in attendance, though, is a whole other ballgame.

“I’m excited about Buffalo, and I heard their fans are crazy and stuff like that, so I’m excited for the opportunity”, he said. “When I score a touchdown or something like that, I love shushing the crowd and all that kind of stuff”.

That is at least one way in which the comparisons to Heath Miller fall short. It would take extraordinary circumstances for the great humble one to display much of any emotion on the field, at least for anything he’d done, short of a huge, clutch third-down conversion late in a game.

Freiermuth is not going to be Miller’s duplicate in every way, even if he will be able to bring some similar qualities to the offense. But they didn’t bring him here to resurrect the HEAAATTTHHH chants. He’s here to carve out his own legacy and be his own player. Whether in Heinz Field or any other stadium in which a football game is being played.