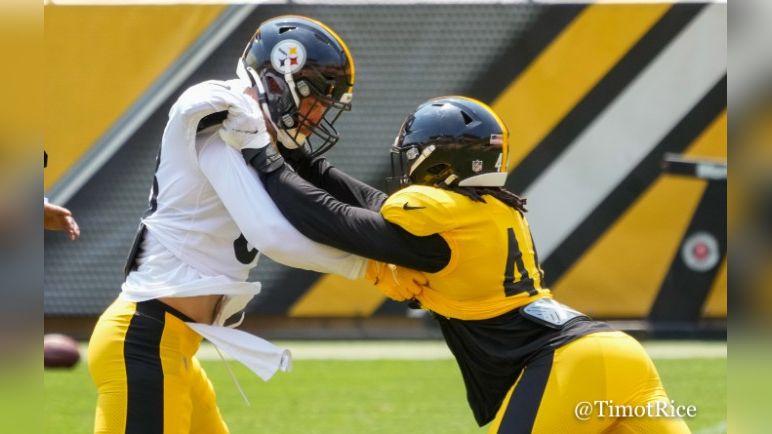 Jamir Jones has gone from afterthought to an NFL player. In the second half on Sunday’s game against the Raiders, he became the team’s #3 OLB following T.J. Watt’s groin injury. It’s been a long, winding, and definitely bumpy path for Jones. But the Steelers don’t care how you got here. Jones is here. And he’s making an impact.

Holding his weekly Tuesday press conference, Mike Tomlin spoke to what Jones has done so far.

“He’s done solidly,” Tomlin said via the team’s YouTube channel. “He did solidly in preseason stadiums. He registered production in those games, tackles pressures, sacks, etc. He has been a quality special teamer for us. He had a tackle last week, I think on punt in the Vegas game. He’s doing the things that young guys do. The natural maturation process. They show you glimpses on offense and defense and so they develop in that area all the while they’re productive, special teams players, and he has been that, um, and they wait for their opportunities on offense or defense.”

Jones was picked up on the Steelers’ Pro Day circuit, working out at Notre Dame’s Pro Day this year after losing his draft-class Pro Day in 2020 due to the pandemic, which cancelled nearly all of these events. Assumed to be a fringe player on the 90-man roster, Jones was this year’s camp darling, excelling against the run and pass in practice and carrying that performance over to games. He also led the team with six special teams tackles, beating out a veteran in Cassius Marsh and rookie draft pick in Quincy Roche to make the squad.

Here’s what we wrote about Jones in our post-training camp recap.

“Probably this camp’s biggest darling, Jones went from unknown – even by me – to someone with a chance to make the roster. He’s certainly done all he could. Jones’ power was the part that surprised me the most. He twice put players on their butts in backs on ‘backers, getting Derek Watt and Najee Harris on the same day. That strength translated to games, his bull rush creating pressure and an interception in the Hall of Fame Game against the Dallas Cowboys.

He had six pressures on 62 pass rushes this season, a strong 9.7% pressure rate. And more importantly, his pressures led to turnovers. His run defense was sound, he played a ton of snaps, working as second-team ROLB ahead of rookie Quincy Roche for all of camp. He was also a strong special teamer with multiple tackles on the coverage unit.”

Through two games, Jones has played 18 special teams snaps. With Watt held out of the second half Sunday, Jones logged his first defensive snaps, playing 15 of them against the Raiders, recording a run stuff against RB Kenyan Drake.

Tomlin compared Jones’ journey to others on the roster.

Pierre went from unknown undrafted free agent to making the roster as a rookie, playing well on special teams, to starting his first game Sunday due to Joe Haden’s injury. Jones won’t start against the Bengals, even if Watt sits out, but could become the #3 OLB for the entire game.

“He might get an increased opportunity to participate this week due to the misfortune, circumstances involving others. But that’s just the nature of this thing. That’s why every man is viable. Every man is working with great urgency. And when I ring that bell, they better answer.”