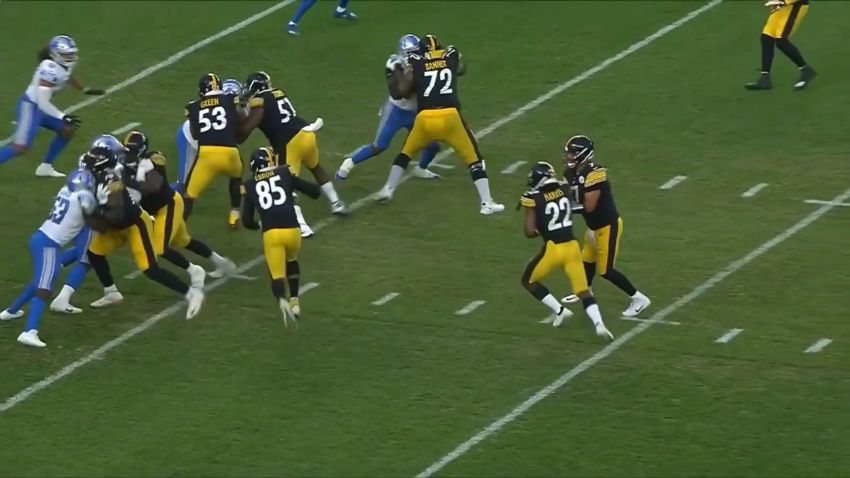 After coming off the board at No. 23 overall in the 2021 NFL Draft to the Pittsburgh Steelers as the first running back taken, many anticipated that due to workload and overall talents, Najee Harris would be a contender for offensive rookie of the year.

Now, just a week away from the start of the 2021 regular season, Harris continues to get a lot of love, this time from the fantasy football community.

As a first-round running back that can do it all, Harris is highly sought after due to his expected workload and overall production on a Steelers’ team that will have more of an emphasis on the run game this season.

Knowing that the Steelers have recommitted to the run game and are going to lean heavily on the former Alabama star, Pro Football Focus’s Jarad Evans has identified Harris as one of his top targets in fantasy football this season.

“My favorite players to target in fantasy football drafts all possess league-winning upside at their current average draft position, so draft them with confidence and watch the fantasy points roll in,” Evans writes.

“The Steelers drafted Harris in the first round of the 2021 NFL Draft specifically because they want him to fill the old Le’Veon Bell role,” Evans writes. “The former Steelers superstar was a fantasy football monster during his five years in Pittsburgh, racking up 1,259 total yards and eight touchdowns on 289 touches in his rookie season. That feels like Harris’ floor, as he should easily top 300 touches this season. Harris should be a first-round pick in every single fantasy draft, but he consistently comes off the board in the middle of Round 2. Volume is king for running backs – the Steelers’ new bell cow boasts arguably the best running back role after Christian McCaffrey and Dalvin Cook (and maybe Ezekiel Elliott). Don’t get too caught up in the Steelers’ offensive line woes because the volume will be there for Harris.”

Evans is spot on in writing that, when it comes to fantasy football and Harris’s outlook, that potential team owners should not be worried about the offensive line in front of Harris. He’ll likely receive more than 200 carries and should see more than 80 targets as a rookie as the Steelers lean on him heavily. With volume there for the rookie, it will be up to him to produce with that workload.

Should he be able to produce as anticipated, he carries league-winning upside and should be a value grab after the initial top 6-8 fantasy running backs.