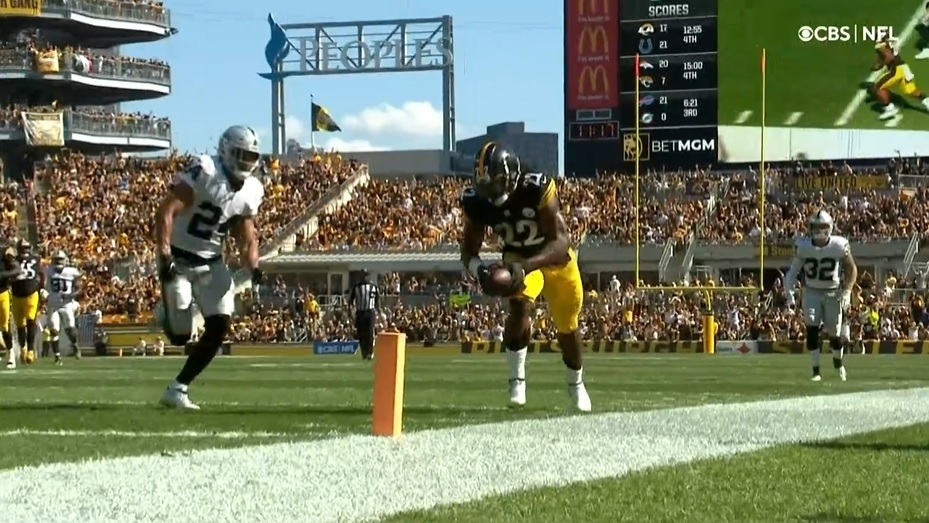 It took until the fifth NFL game Najee Harris has ever played in. Three in the preseason, two in the regular season. But he finally found the end zone, a 25 yard receiving score in the second half of Sunday’s loss to the Las Vegas Raiders.

After the game, Harris talked about what he saw on the play.

“When you get more of a feel for the game, you understand what type of defense they’re in,” he told reporters in a postgame presser. “So as a player, you understand what the free spots that’s going to be there as the day goes on. He had me man, and I knew where the free spot was at, I would have a lot of space to work with. So that’s what happened.”

First time in the end zone for @ohthatsNajee22!

Harris has arguably been underutilized as a receiver early on, a well-rounded back who caught 80 combined passes his final two seasons at Alabama. He finished Sunday with five receptions for 43 yards and that touchdown. The problem is Harris had more yards through the air than on the ground, carrying the ball just ten times for 38 yards. Like Week One, he was bottled up for much of the game with only one or two gap runs springing him to the second level.

Harris’ most impressive catch and run of the day came in the first half, a nine yard grab that saw him toss strong safety Jonathan Abram to the sideline and pick up a couple extra yards of YAC.

Pittsburgh will need to see more of Harris – or anyone on offense, really – find the end zone beginning in Week Three against the Cincinnati Bengals. Through two games, the Steelers have just three offensive touchdowns. No running back has found the end zone on the ground yet, though JuJu Smith-Schuster took an end around for six today.