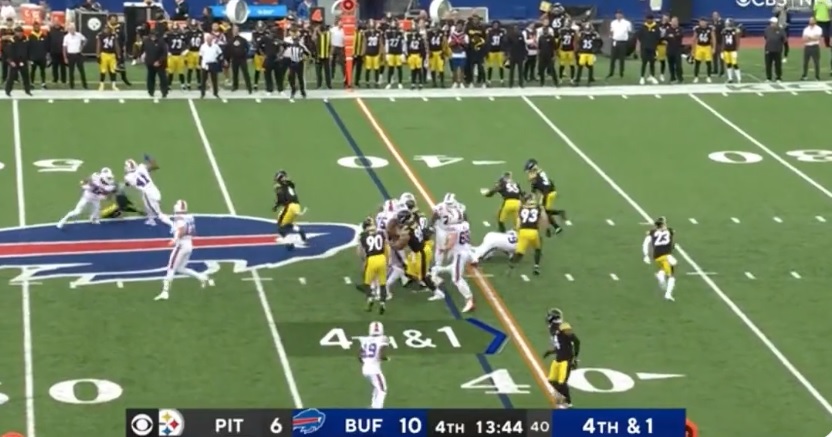 Watching the Pittsburgh Steelers’ defense dominate the Buffalo Bills Sunday for a second and third time through the time gets more and more enjoyable, if I’m being completely honest.

After slogging through some rough preseason games tracking the missed tackle data, it was a real pleasure to go back through Sunday’s come-from-behind win over the Bills at Highmark Stadium in Orchard Park.

In fact, the rewatches showed me something I’d never seen before while tracking the data here at Steelers Depot: both teams missed just one tackle apiece in the first half. Remarkable work for both squads in Week 1 after a shortened preseason.

Remarkably, the first half between the Steelers and Bills was very clean in the tackling department. Just one miss each in the first half for the two teams. I've never had that occur in my 6 years tracking tackles for @Steelersdepot

The second half had more missed tackles than the first as both teams really seemed to open things up, but overall it was a terrific performance by the Steelers and the Bills in the tackling department, especially for a Week 1 game.

With that said, let’s dive into the Week 1 missed tackles report.

Total missed tackles through one game – 5 (5.0 misses per game)

Overall, those numbers are pretty darn solid for the Steelers in Week 1, especially coming off of a preseason in which a number of starters rarely played. Typically under Mike Tomlin and Keith Butler, the defense has gotten off to a slow start in the missed tackles department in Week 1. In fact, in Week 1 last season on the road against the New York Giants, the Steelers missed 11 total tackles in that win.

That’s quite the improvement to this week.

None of the missed tackles on Sunday were egregious or led to points for the Bills directly.

Minkah Fitzpatrick had a rough go of things against Bills’ quarterback Josh Allen outside of the pocket, having his ankles snatched on the Bills’ second drive of the game, but I didn’t count that as a miss. Where Fitzpatrick gets his miss at though is late in the third quarter on an Allen scramble on a similar play in a similar area of the field.

Fitzpatrick was simply incredible on Sunday, and he could have had an even better day in the tackling department if he makes this play in space on the Bills’ powerful quarterback. Obviously he still has to guard against Allen using his arm here, but at some point Fitzpatrick needed to commit to coming downhill, and needs to do a much better job of attempting a tackle here rather than diving at ankles.

That’s not going to work on a guy like Allen.

Earlier in the third quarter, Joe Schobert recorded his first miss as a Steeler, whiffing on Bills’ slot receiver Cole Beasley in space.

Schobert has the hook/curl responsibility here and is in great position to make a play on Beasley. He just completely misses though coming downhill to try and stick the diminutive receiver in space. It should have been a clean play for Schobert, but he ducked his head at the last minute and appears to anticipate Beasley turning outside rather than inside, leading to the miss.

Coming off of a career year in the tackling department, Terrell Edmunds was rather good throughout the game in his role, but late in the fourth quarter as the Bills got their run game going with Devin Singletary, Edmunds came up with a woeful rep in space, leading to his lone miss of the game.

Offensively, the Steelers forced just four misses in the game, meaning that the Steelers lost the tackles battle on Sunday with a mark of -1.

All is well that ends well though as the Steelers emerged victorious where it matters: on the scoreboard.

Harris struggled to get going and do much of anything with the football behind a new offensive line that really labored to create much push at all in the ground game until late in the game.

Harris forced two misses on this run here early in the fourth quarter with the Steelers driving, but he did take a monster shot from Bills’ linebacker Tremaine Edmunds at the end of the run, which you never want to see, especially for you first-round running back that you’re counting heavily on.

He made a play though, and that’s what counts.

JuJu Smith-Schuster was terrific in the game on Sunday and really made a statement on his catch midway through the second quarter, taking a short dump off from Ben Roethlisberger before then running over Bills’ standout cornerback Tre’Davious White in the flat, before then lowering his shoulder into Bills’ safety Jordan Poyer, moving the chains.

That’s what JuJu does, though I only gave him one forced miss because Poyer still technically tackled him.

Overall, it was a really good day for the Steelers defense on the scoreboard and in the tackling department, but there is some room for improvement from the Steelers’ offense and its skill players in terms of creating plays with the ball in their hands.

On to Week 2 against the Las Vegas Raiders we go!