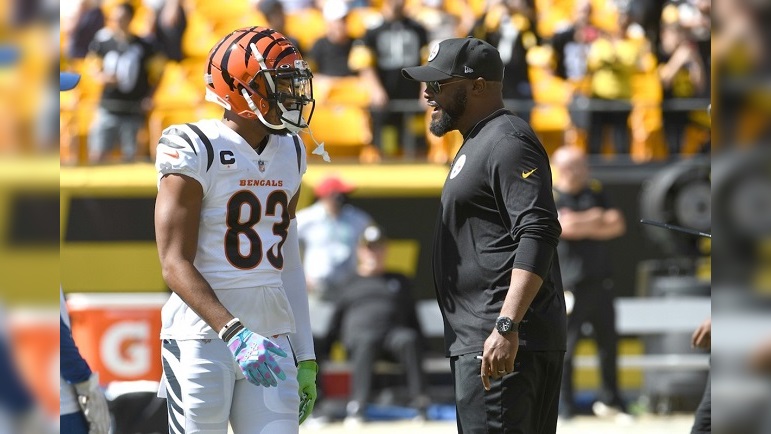 Cincinnati Bengals wide receiver Tyler Boyd has been all over the Pittsburgh Steelers since his team won on Sunday at Heinz Field. Most of what Boyd said about the Steelers after the Bengals won on Sunday centered around him thinking Pittsburgh players essentially quit at that end of that contest.

“I think the good thing about that win was, not only did the Steelers feel that, everybody in the country felt it,” Boyd said. “Because the last plays of the game for them, they gave up. You could see it. They had three drops in a row. For a team to see that is giving us more power, giving us the antidote to know how good we are. For a team to just lay down like that before the game is over because no matter how much we are losing by or whatever the case may be, I know me, I know us, we’re not going to give up. We’re going to continue to try and make something happen. But they portrayed it to the whole nation on TV what they were about and how they gave up.”

On Tuesday, Steelers head coach Mike Tomlin held his weekly press conference and after his long opening remarks, he was predictably asked to respond to Boyd’s accusation that Pittsburgh players quit late in Sunday’s game at Heinz Field.

“I don’t care about Tyler Boyd’s opinion regarding what transpired at any point in that game,” Tomlin said. “Like I said after the game, and it includes him, I tip my cap to that team and that organization for their performance and win. And I proceed to moving on to the next challenge and, you know, we better play better the next time we see them. That’s always our mentality. I care less about, you know, what people say that are not involved in us and with us and function and understand who and what we are. He’s entitled to his opinion, but you know, I don’t have to respond to it.”

Well, in essence, I guess Tomlin did respond to some degree. Him saying that his team better play better the next time they play the Bengals is enough of a response, really. Unfortunately for the Steelers, the next time they play the Bengals won’t be until Week 12. That game will take place in Cincinnati, and by then the Steelers will have already played two other divisional games against the Baltimore Ravens and the Cleveland Browns.

Whatever the Steelers record is come Week 12, you can bet that Tomlin will remind his team about what Boyd and Bengals cornerback Mike Hilton, who was previously with Pittsburgh, both said following the Week 3 game at Heinz Field. Boyd, by the way, basically doubled down on his initial remarks about the Steelers essentially quitting on Sunday in a Tuesday morning tweet.

“Of all my years playin the Steelers I’ve never saw them finish like that and I have nothin but respect for them but wats understood doesn’t need to be explain jags up next,” Boyd posted on Twitter Tuesday morning.