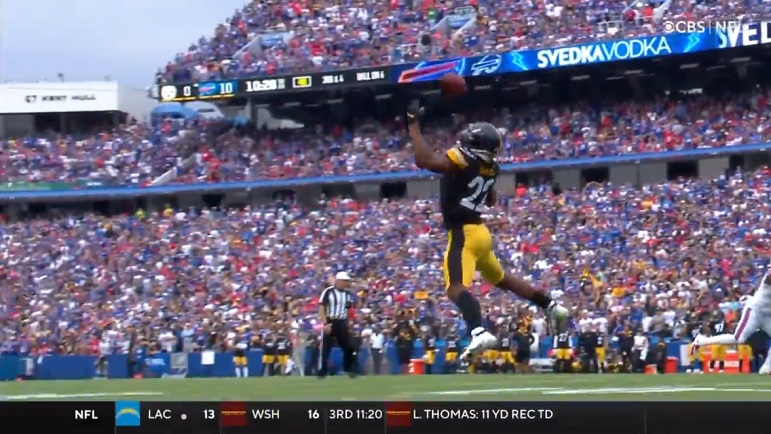 In case you have not already heard it, Pittsburgh Steelers rookie running back Najee Harris played all 55 offensive snaps on Sunday against the Buffalo Bills. I fun fact related to that is that, according to Next Gen Stats, it was just the sixth time that a running back played 100 percent of all offensive snaps in a single game since the beginning of last season. With Harris not coming out of Sundays game against the Bills, Steelers head coach Mike Tomlin was asked about that during his Tuesday press conference, and if that was the plan for the rookie running back and first round draft pick ahead of the contest.

Najee Harris played on all 55 of the #Steelers offensive snaps today against the Bills. It's just the sixth time a running back played 100% of snaps in a single game since the beginning of last season.

David Montgomery has accounted for 4 of the other 5.#PITvsBUF | #HereWeGo pic.twitter.com/llecnAaGGO

“You know, we were monitoring his conditioning and how the game went for him,” Tomlin said of Harris’ playing time on Sunday. “It was a first time, but, you know, he’s a highly conditioned guy. We weren’t moving the ball fluidly enough in the first half where it became an issue. And so that’s really where it captured your attention, early in the game. You know, you burn a lot of fuel as a young guy early in a game, anxiety and so forth. And so, it became less of an issue as the game wore on. He settled down; we found our rhythm. And so I was happy with how that transpired and unfolded and the same could be said for the quality of his play as the game unfolded.”

Overall, it wasn’t a great game first NFL game for Harris on Sunday, as the Alabama’s product gained just 45 yards on 16 total carries in addition to catching just one pass from quarterback Ben Roethlisberger for another four yards. Just six of Harris’ 16 total runs were successful on Sunday against the Bills, as well.

While Harris’ play certainly wasn’t awful on Sunday in his NFL debut, he made it clear after the game that he knows there are areas of his game that he certainly needs to improve in moving forward into his first season.

“I mean, like there’s only some stuff that I could learn that you can learn as a rookie in the game, Harris told Missi Matthews right after the game on Sunday. “And that’s what happened today. I mean, like, you know, there was certain pressures that you talk about in meetings, but when it’s out on the field, they did a completely different thing. So, you know, adjusting to that in the game. Learning to just take what you can, at same time, too, the speed of the game. A lot of guys flying over. The safeties were playing down a lot. You know, a lot of free hats. So, there’s a lot of personal things that a rookie running back can only learn in the game. So, you know, hopefully just got to keep improving every day.”

Harris and the Steelers are now getting ready to play the Las Vegas Raiders on Sunday at Heinz Field. While the Raiders did win their Week 1 game on Monday night at home against the Baltimore Ravens, their defense did give up 189 net rushing yards in that contest with running backs being responsible for 98 of those. Two of the Ravens’ touchdowns on Monday night were also scored by running backs.

It’s kind of doubtful that Harris will play every offensive snap on Sunday against the Raiders as the Steelers are sure to spell him for a few plays with backups Benny Snell Jr. or Kalen Ballage, or both. Even so, expect Harris to play at least 80 percent of all offensive snaps on Sunday against the Raiders and maybe even as much as 95 percent of them.