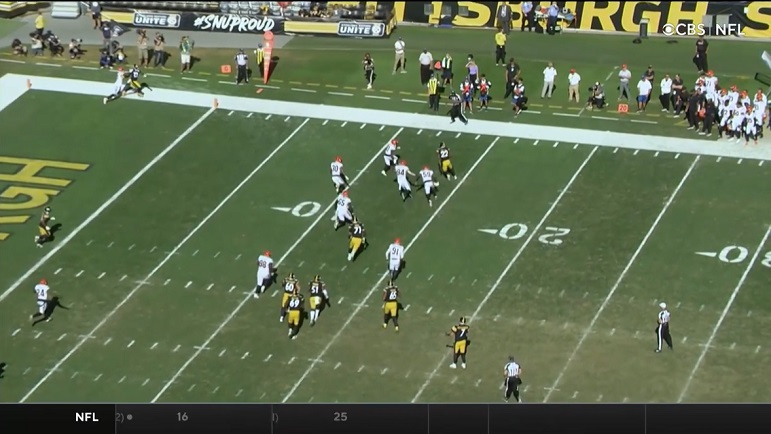 Against the Cincinnati Bengals on Sunday, the Pittsburgh Steelers ran a 4th and 10 play late in the contest that left a lot of people scratching their head. That play, a swing pass to running back Najee Harris from quarterback Ben Roethlisberger on 4th and 10 at the Bengals’ 11-yard line, resulted in a loss of one yard. After the game, Roethlisberger was asked about the play and his decision to throw way short of the goal line.

“They have a type of defense—we call it a picket fence—where they just sit back,” Roethlisberger said. “And we anticipated that. That’s what they showed, so we were going to try to get it to him to get guys out front to block for him, see what we could do. You’re a little limited from that far out on what you can do except maybe throw a ball up or, you know, in hindsight, we wish we would have taken a shot in the end zone. I wish I would have done that.”

On Wednesday, Roethlisberger was again asked about that Sunday fourth down play and reminded that after the game he said that he wished he would have taken a shot to the end zone. He was asked to revisit what he had said after the game after having a chance to watch it back. In short, he was asked if there were those options there for him and could he have possibly checked out of that play when you saw what the defense was doing.

“I forget everything now about that play,” Roethlisberger said. “Sorry.”

That was quite an interesting Wednesday response from Roethlisberger, and it probably played a small part in Steelers offensive coordinator Matt Canada being asked about the play on Thursday. Canada was asked to explain what the call was on that late fourth down against the Bengals and what happened to cause it to fail miserably.

“We just didn’t execute it as we hoped,” Canada said. “We called a play. We had guys in the end zone, and you know, it just didn’t work. So, bad play. Plays that don’t work are bad plays.”

Full context on what Matt Canada said about the 4th down play late #Steelers pic.twitter.com/WWFzBXUsbT

It seems like a lot of people are interpreting what Canada said on Thursday as him throwing Roethlisberger under the bus on that failed fourth down play. It’s hard to say for sure.

Our own Alex Kozora has since tweeted out an aerial view of that play and as you can see, Harris had no blockers out in front as the wide receivers were running routes. Did Roethlisberger make the wrong read? Run the wrong play? Get confused? We’ll likely never know for sure. The only thing we do know is that it was a bad play. Oh, was it ever a bad play.

After the game, Roethlisberger said the swing pass is designed. WRs are supposed to block in front.

Even if we grant that, none of the WRs are blocking. They're all running routes here. So what's the design/intent here? https://t.co/zcVd1Cho6E pic.twitter.com/tnwbkyALHv