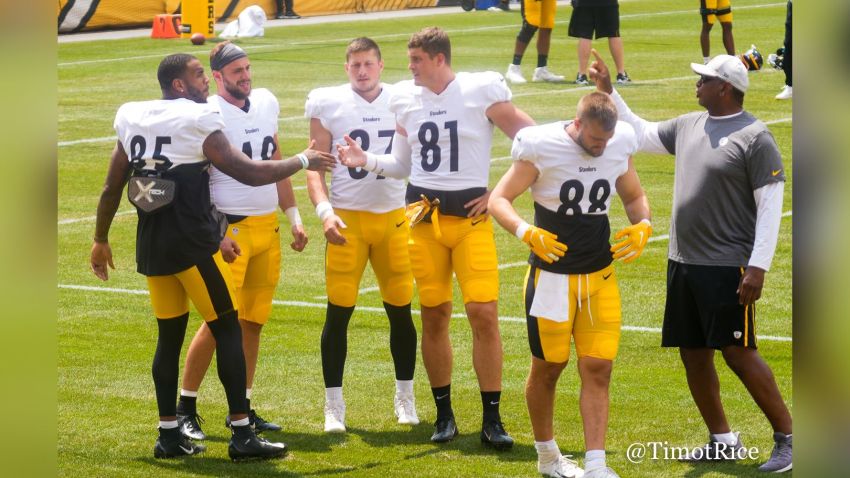 In years past, the Pittsburgh Steelers have occassionally utilized two tight end formations, dating back to the days of Heath Miller and Matt Spaeth, to guys like Jesse James and Vance McDonald.

In 2020 alone, former Steelers’ offensive coordinator Randy Fitchner would utilize two tight end formations with McDonald and Eric Ebron, but ahead of the 2021 season, new Steelers’ offensive coordinator Matt Canada seems to have more excitement and anticipation for the two tight end sets with Ebron and rookie tight end Pat Freiermuth, who will both provide defenses with serious matchup problems in the passing game.

Asked about potentially using two tight end sets this season just days away from kickoff against the Buffalo Bills at Highmark Stadium in Buffalo, Canada said he’s looking forward to rolling that formation onto the field often in 2021, especially because of the development Freiermuth has undergone throughout the summer after being a second-round draft pick in April.

“He’s just gotten better every day. And I think, you know, you look at that,” Canada said to reporters. “I mean the ability to have one, two tight ends on the field, we’re certainly excited about that ability, the different things different guys can do at all positions. But you’re speaking about tight end, but specifically about Pat. I mean, I’ve talked about it, his work ethic, his knowledge of the game, and he’s come in and really worked on his craft and we feel like it in certain situations, it gives us an opportunity to be the best we can be. And that’s all we’re trying at every spot.”

Rookie tight ends tend to have a steep learning curve into the NFL, but Freiermuth is doing all that he can to avoid that and be a productive member of the Steelers offense in 2021. The Penn State product hit the ground running this summer, catching everything in sight while showing hie improvements as a blocker day by day, earning the No. 2 role behind Ebron, rather than being handed it.

How he will fair in games that truly counts remains to be seen, but there are plenty of reasons to be encouraged about the second round pick and what he could do in pairing with Ebron in two tight end sets for the Steelers’ offense this season.