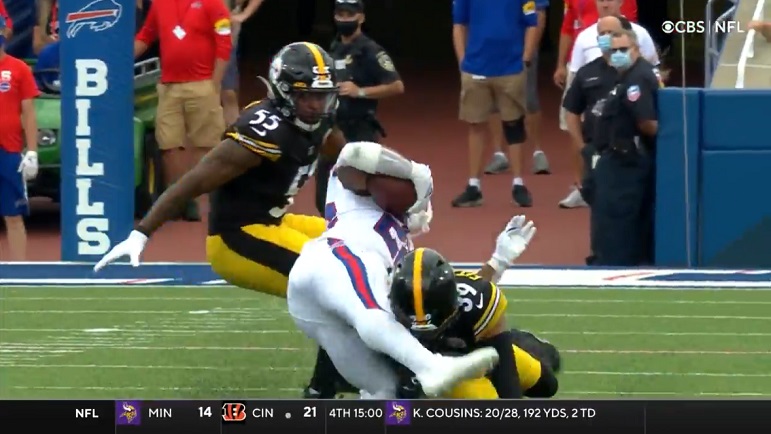 While Pittsburgh Steelers cornerback Cameron Sutton made one heck of a great read and tackle on a fourth-and-1 play in the fourth quarter of the teams Sunday road game against the Buffalo Bills, what seems to have been forgotten is the stop that safety Minkah Fitzpatrick made one play before that. That play was as third-and-3 run to the right side by Bills running back Matt Breida that forced Fitzpatrick to come way down from the secondary to make the tackle on. On Thursday, Steelers defensive coordinator Keith Butler was asked about that Sunday play that Fitzpatrick made and specifically about the read the safety made on it.

“He read it. He read it,” Butler said. “He was supposed to be the deep pass and came down and dadgum made a play. Another Troy [Polamalu]-like deal.”

It really was a great play by Fitzpatrick and one he had to make because of outside linebacker T.J. Watt not carrying out his assignment properly after the snap of the football. Watt admitted as much after Sunday’s game when asked to comment on the fourth down play that Sutton made.

“I think the play before it was I came up and under the tackle,” Watt said. “I shouldn’t have. And Minkah came down like a missile from the middle of the field and made it fourth and one.”

Butler was asked a lot of questions about Fitzpatrick on Thursday and several of them included him being compared to former Steelers safety Troy Polamalu, who is now officially a Hall of Famer as of several weeks ago. First, Butler was asked if Fitzpatrick now has the sort of same free range and liberties in the defense that Polamalu

“Not as much, I don’t think,” Butler said. “Not as much, but he’s a good player for us. We like what he can do. We’re gonna move him, we’re gonna use his versatility.”

After that response, Butler was them asked if that could change soon when it comes to Fitzpatrick being allowed to take liberties at will.

To the Steelers credit, they had Fitzpatrick playing all over the place in the defense in Week 1 against the Bills and in doing that, it probably made Buffalo quarterback Josh Allen very uncomfortable throughout the game. Was how Fitzpatrick used on Sunday just the beginning of how we might see him used as the Steelers regular season progresses?

“We’re gonna do a lot of things with each guy,” Butler said on Thursday. “They’re versatile so we’re gonna move them around a little bit in different situations. Minkah is good enough to play anywhere we’ve got on the field. He knows the defense. We’re gonna move him down in the box sometimes, sometimes we’re gonna put him as the post safety.”

While how we saw Fitzpatrick used against the Bills on Sunday in Buffalo might be new to most, and while it might look like the team has added more responsibilities to him this season, Butler said on Thursday that the safety isn’t being asked to do things he wasn’t asked to do when he was playing at the college level for Alabama.

“It was new for him last week, not when he was at Alabama,” Butler said. “He did it at Alabama so we figured he can do it here too and he can.”

Based on what the Sunday tape showed, and including what Butler said on Thursday, it’s very exciting to think about how the Steelers might utilize Fitzpatrick moving forward into the 202021 regular season. Up until Sunday’s game against the Bills, Fitzpatrick was mainly used as a deep safety and thus that made him a lot easier to avoid.

With it now looking like he could show up anywhere in the Steelers defense in 2021, he might just wind up having his best NFL season to date, which then should result in him being voted a First-Team All-Pro for a third consecutive year. In short, we might just continue hearing Fitzpatrick being compared to Polamalu moving forward and especially if he continues to make game-changing plays like the one he made Sunday on third down against the Bills.

“Yeah, you hear all these guys talk about Troy; Troy did the same thing,” Butler said. “He moved around a little bit. Like I said, most quarterbacks read the safeties in terms of dissecting defenses. As much as you can move him around, as much as you can play different positions with him, that’s gonna give them problems.”