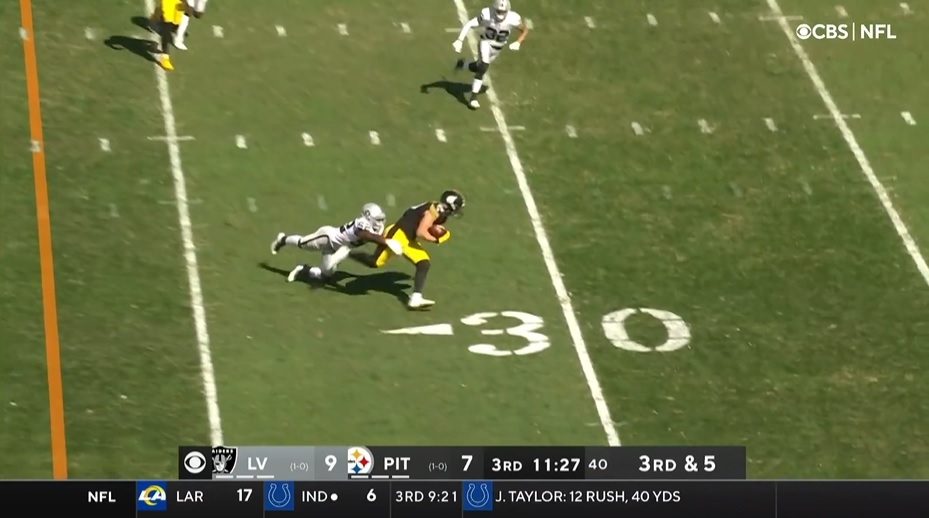 In the moment, you might not think about it. How those reps way back in May during rookie minicamp can play a role in the middle of September. What gets installed month ago still gets applied to regular season action. A great example of that comes with Pat Freiermuth’s 14-yard reception early in the third quarter against the Las Vegas Raiders.

Before we look to that, let’s go all the way back to Freiermuth’s first taste of the NFL. Rookie minicamp. Here’s a clip I pulled shortly after things wrapped up in May. Freiermuth is running a stick route against linebacker Buddy Johnson playing with inside leverage. Freiermuth breaks away from him and makes a combative catch, going to the ground at the end of it.

Very similar concept in Week 2 versus the Raiders. Freiermuth again running a stick route against a LB playing inside leverage. He again makes the catch. But check him out at the top of the route. Much more explosive, not needing to take as many steps to chop and slow himself down out of his break. Just plant and drive off the inside foot and break to the outside.

It allows him to create more space and do damage after the catch (along with a little push off at the top), picking up extra YAC on top of the initial reception.

He also shows his strong hands, I’ve still yet to see the guy drop a pass since he’s been drafted (he’s 5/5 on targets/catches this year), and in total, it’s a 14-yard play.

Here’s the two plays side-by-side. That’s why guys, especially rookies, go through these reps all offseason. Do it over and over until you get better. Freiermuth’s shown improvement in all areas, as you’d expect, but it’s cool to see what he was doing four months ago apply to what he’s doing right now. We don’t get to look into that window too often.