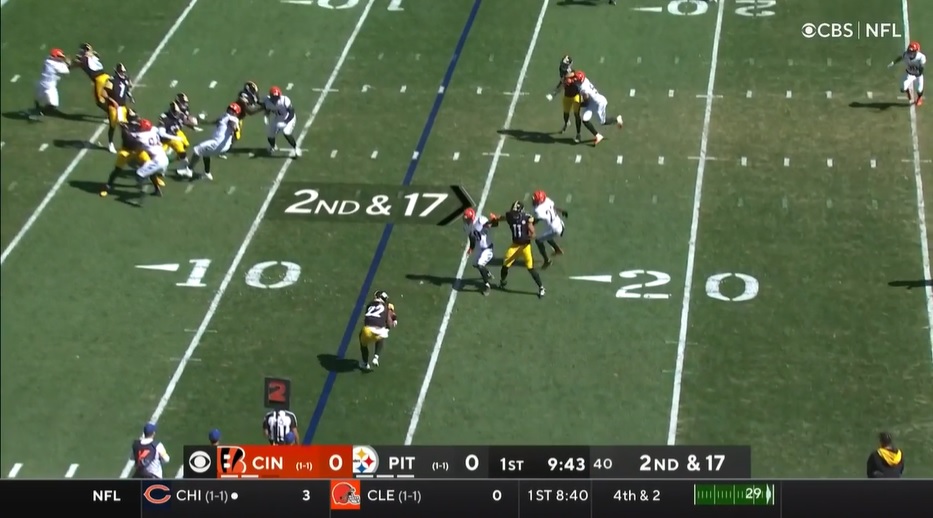 To much the chagrin of Steelers fans, Pittsburgh suffered a brutal 24-10 home loss to the Cincinnati Bengals Sunday afternoon. As has been the ongoing trend dating back to last season, the offense sputtered for Pittsburgh throughout the contest, as the team only tallied 45 yards rushing compared to 297 yards through the air. However, it took QB Ben Roethlisberger 58 pass attempts to get to that yardage total.

With Diontae Johnson ruled out of the contest due to a knee injury and JuJu Smith-Schuster leaving the game due to a rib injury, it was expected that rookie RB Najee Harris would make more of an impact as a receiver. Harris far exceeded any expectations of him as a receiver Sunday, catching 14 passes (on 19 targets) for 102 yards. According to Next Gen Stats, Najee Harris was targeted 19 times on 52 routes, the most routes run by any RB in a game in the Next Gen Stats era (since 2016) Harris gained 109 yards after the catch (+31 YAC over expected). Najee Harris’ 79 offensive snaps were the most for a rookie RB in a game since 2007 per PFF.

Obviously, having Harris being the main target in the passing game came to the fact that the dink-and-dunk passing game was as evident as ever this weekend with Ben Roethlisberger not attacking the middle of the field past 15 yards and only having a couple of completions outside the numbers 15 yards or more past the LOS. Hence Harris’s heavy utilization as the check down option in the passing game. Here is one example of this early in the game against Cincinnati on second down where Ben finds Harris leaking out of the backfield for the catch-and-run opportunity, making a defender miss in space and nearly picks up the first down.

Later in the quarter, Harris makes a similar play going from the right side out to the left, catching the dump off from Ben and takes it upfield, getting to the sideline she gets ankle tackled by #30 Jesse Bates, taking the ball inside the 10.

However, Harris showed his capability of playing as a true receiver detached from the LOS against the Bengals, making many of his receptions running routes like a WR would. Watch this play where Harris lines up at the top of the screen stacked behind #13 James Washington and finds the soft spot in the zone in the middle of the field, catching the low pass by Roethlisberger while getting hit by #55 Logan Wilson for the first down.

You could see in the second half that the offense schemed up touches in the receiving game for Harris, acting almost as an extension of the running game that the completely abandoned yet again. Watch this WR screen to Harris at the top of the screen with #88 Pat Freiermuth running coverage away from Harris by attacking the seam up the middle of the field. Harris catches the pass with the defense sitting in zone coverage dropped eight yards off of the LOS, spinning out of one tackle and falling forward after getting hit by two other defenders for a positive gain on first down.

Harris plays as a receiver the same way he plays as a runner: running with physicality after the catch refusing to let one defender take him down if he can help it. That statement couldn’t be more accurate when watching this reception out of the backfield, making Wilson miss after making the catch and evades the tackle attempt by the corner as he gets into the open field, getting wrapped up by DE #94 Sam Hubbard down the field, but proceeds to drag him from behind for another five yards until another defender comes in to help bring him down.

If you want a reminiscent play to the nasty stiff-arm Harris put on Johnathan Abram last week, watch this catch-and-run from the slot on the left side of the formation on the quick out. Harris catches the ball and shakes the corner in space and viciously stiff arms Logan Wilson to the ground as he attempts to tackle him. The rest of the defense converges on Harris to bring him down, but not after Harris makes his presence felt after the catch.

Not only can Harris go through you or around you as a runner after the catch, but he can also go over you as he became known for at Alabama and also showed in preseason action. On this play, Harris catches the ball leaking out of the backfield to the right side of the field, stiff arming #59 Akeem Davis-Gaither and then proceeds to hurdle former Steelers CB #21 Mike Hilton, leaping over top of him as Jesse Bates comes in to finally knock him out of bounds.

While Harris made some impressive things happen in the passing game both as a receiver out of the backfield as well as a receiver split out in the slot or on the boundary, he isn’t susceptible to some criticism due to his drops. Dave Bryan highlighted after the conclusion of the game that Najee Harris had 14 catches for 102 yards and 14 carries for 40 yards, but also had three drops on 19 targets. That comes out to 15.8% drop rate on his targets, not ideal in any scenario. While it can be expected that more targeted receivers will have more drops (IE Diontae Johnson in 2020), the drops by Harris Sunday classify as pretty egregious as seen on this play below.

As you can see above, the ball placement was right in Harris’s hands, but he took his eyes off of the football to look upfield before securing the catch, ultimately dropping the football. Here is another example later in the quarter, again not securing the ball in being too quick to too upfield.

Infamously, the last play of the game ended in a similar fashion on a needed fourth down conversion where Ben checks it down to Harris who has the first down, but watches the ball fall off of his hands to the ground to end the game.

We could say that Harris just has shaky hands and isn’t a reliable WR in the passing game, but that statement would be false. Harris is a skilled pass catcher that has strong hands and can make tough catches in traffic against defenders matched up with him in man coverage. Watch this rep where Harris lines up on the boundary at the top of the screen across from S #24 Vonn Bell. He runs the quick slant across Bell’s face, catching the ball with Bell and Hubbard converging on him, but brings in the catch and holds onto the ball for the third down conversion.

Overall, it was an up-and-down performance for Najee Harris as a receiver Sunday afternoon against Cincinnati. We got to see his skillset on full display and the plethora of ways he can be featured in the passing game, but we also saw low moments in terms of lack of focus to secure the catch, resulting in multiple bad drops on the day. Personally, I would hope that Harris doesn’t have as big of an impact in the passing game in the future, as this hopefully means that the running game is being established as well as the passing game is attacking the defense in the intermediate and deep portions of the field rather than relying on the short passing game for the entire contest.

Still, it’s good to see the impact Harris can have as a pass catcher in this offense, and OC Matt Canada can utilize this weapon to create mismatches against linebackers and safeties tasked with covering. Getting Harris going through the air could get other passing options advantageous looks as coverage focuses in on Harris, which hopefully will keep defenses playing honest and allow a running game to get going. With Green Bay next on the docket, expect Harris to be heavily utilized again as a pass catcher.

What are your thoughts on Najee Harris’s performance as a pass catcher Sunday against the Bengals? Are you impressed with his overall performance, or are you concerned with the drop issues? What do you see his role in the passing game being going forward? Please leave your thoughts in the comments section below and thanks again for reading!