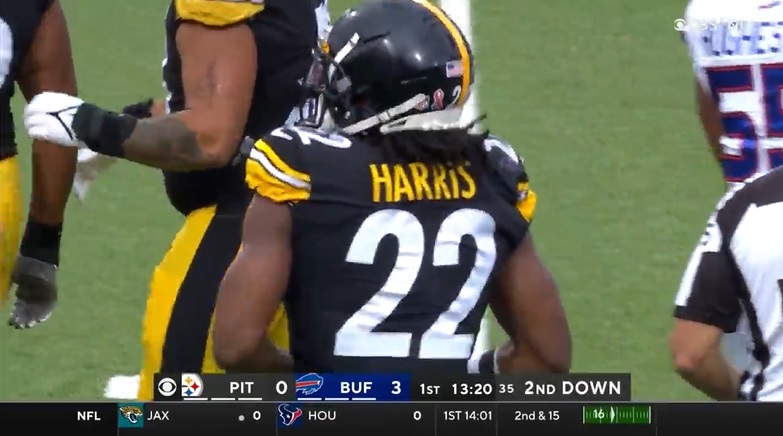 If I were to have told you that the Pittsburgh Steelers would defeat the Buffalo Bills by a score of 23-16 with Ben Roethlisberger only throwing for 188 yards before the game started, I would wager that you would have assumed that rookie RB Najee Harris had an impressive debut on the ground. Based on the usage alone, you would likely expect Harris to have had a field day in the regular season opener. According to NFL Next Gen Stats, Najee Harris played all 55 of the Steelers offensive snaps against the Buffalo Bills on Sunday which is just the sixth time a running back has logged all of the teams’ offensive snaps in a game dating back to last season.

However, the reality is Harris struggled to get anything going on Sunday afternoon, finishing the game with 16 carries for 45 yards rushing (2.8 YPC) along with one reception for four yards. The great Dave Bryan of Steelers Depot pointed out that 61% of Najee Harris’ yardage on Sunday against the Bills came after contact, and he averaged just 1.2 yards of space before contact, per PFF’s first-run analysis. Bryan also shared his famous run success rate stat breakdown for Harris, as only six of the 16 carries Harris had in Week 1 were deemed as successful runs based on the charting.

So, what led to Harris failing to establish himself on the ground? Many would initially point out the offensive line, which would be fair given what transpired on Sunday. Going back through the film, Harris struggled to get anything going as the defense swarmed to the football. Check out his first run on the afternoon where he takes the handoff and can’t get to the hole on the right side before #49 Tremaine Edmunds flies in to wrap him up after a two-yard gain.

Later in the drive, we see Harris take a pitch to the left with blockers out in front, but the blocking doesn’t get a push forward as Harris tries to bounce it to the sideline in hopes of finding a hole to run through. He ends up bursting forward for a modest gain on the play, but the lack of push became an issue throughout the game.

The very next play, we see Harris take the carry to the right. The play is initially well blocked with a clear hole between the RG and RT. However, RT #76 Chukwuma Okorafor fails to maintain his block on #50 Gregory Rousseau, getting pushed back by the defender and easily shed to the side as Harris approaches the hole to get caught and brought down for a gain of two yards.

Here is another run in the first quarter where Harris has nowhere to go as LT #65 Dan Moore Jr. overruns #57 A.J. Epenesa who comes off free to slow down Harris from behind while #91 bench presses #51 Trai Turner back into the backfield to wrap up Harris right at the LOS where he fights to fall forward for another gain of two yards.

The push upfront what poor for most of the game, especially from Okorafor. Here we see he and Dotson immediately give ground on the left side with Trai Turner failing to get the cut block on the back side, allowing the defensive lineman to wrap up Harris in the backfield for the big loss of yardage on the play.

There were a couple of instances where the blocking was there, and Harris exploded for big runs. Check out this gain of nine yards where the OL executes their blocks well along with a great block by rookie TE #88 Pat Freiermuth to spring Harris to the second level of the defense on the inside draw.

Harris manages to get the ball within one yard of the sticks which he picks up on the very next play shown here. Again, just from observation, the OL appears to be either stalemating or giving ground at the LOS, not getting any leg drive to move the pile, thus making Harris have to earn literally every yard.

When Harris didn’t have a defender in his face immediately as he took the handoff, he was able to execute as the back we all pegged him to be coming out of Alabama, being the big power runner to push the pile and always fall forward. Check out this third-and-inches situation where the offense calls Harris’ number and he responds by fighting forward to pick up the first down. He even gets met in the backfield by #39 Levi Wallace coming off of the edge because of the lack of push on the left side of the line but runs through the backside of #69 Kevin Dotson to cross the line and move the sticks.

There are moments in the game where I do think Harris showed some of those first game jitters and panicked, not making to correct move in the given situation. For example, here in the red zone breaks through the LOS and has #23 Micah Hyde sitting right in the hole waiting for him. Harris tries to hit the spin move, but Hyde wraps up his legs as the linebackers come in to clean him up for no gain. Should Harris have planted his right foot into the ground to cut back to the left, he would have been able to pick up some yardage, and if #18 Diontae Johnson gets a block on the corner, Harris could have run toward the sideline and possibly scored.

Still, this would have been difficult to process in the moment, but that is why Pittsburgh drafted Harris in the first round of the 2021 NFL Draft. Not only was he a power back that could be a bruising runner in-between the tackles, but also has surprising elusiveness for a back for his size. It probably didn’t help matters that Harris was quite literally “running for his life” all afternoon, hardly ever getting a clean hole to run through. Watch this stretch run to the right side where Harris gets past the LOS but tries to bounce it to the sideline, hoping to get a block from #81 Zach Gentry or #19 JuJu Smith-Schuster, but doesn’t get one as he gets swarmed by the defense.

Harris was also touted as a skilled pass catcher coming out of college, being a threat out of the backfield and also as a receiver split out wide or in the slot. He only mustered one catch on the day as shown below, but he had two other targets where Ben missed him on bad overthrows. Hopefully he sees more usage in this area, as he wins on a nice slant pattern over the middle from the slot on superb coverage LB #58 Matt Milano.

Let’s end this film room on a positive note, shall we? In the fourth quarter as Pittsburgh was driving to take the lead, we see Harris rip off a big run on first down, taking the handoff on the draw starts to the left, but bounces it to the right, turning the corner and getting upfield as Tremaine Edmunds catches him in pursuit. Harris shows off his signature physical running style by dragging Edmunds for a couple extra yards with two other defenders coming in to make the stop as he caps off his longest run of the day of 18 yards.

Overall, there is no denying that Harris struggled to get anything going Sunday in Buffalo. A large portion of fault can be put on the execution of the blocking upfront, having too many instances of guys getting blown off of the ball, missing assignments, and generating no push to at least get Harris back to the LOS. Still, there are instances where Harris does need to read the play better in terms of making defenders miss in open space. What should be seen as a positive is the usage Harris received in the game, as he never came off of the field and played the role of a quintessential Mike Tomlin workhorse back.

While I don’t expect this to be the case every game, it would be safe to bet that Harris should see around 80% or more of the snaps in a majority of games that Pittsburgh is close in score with their competition. This should be a sigh of relief for fantasy owners like myself who decided to take Harris high due to his projected workload. Pittsburgh has a lot of things that need to be improved, but the nice thing is that they likely can’t play any worse on the ground than they did Sunday to be honest. With the Las Vegas Raiders next up on the schedule, hopefully Harris has a bounce-back game to show what he can do with improved play upfront.

What are your thoughts on Najee Harris’ performance on Sunday? Was his lack of success on the ground a product of the offensive line play, his own lack of execution, or a combination of both? Are you jumping ship on him after this performance, or do you think that he and the running game as a whole will rebound going forward? Please leave your thoughts in the comments section below and thanks again for reading!