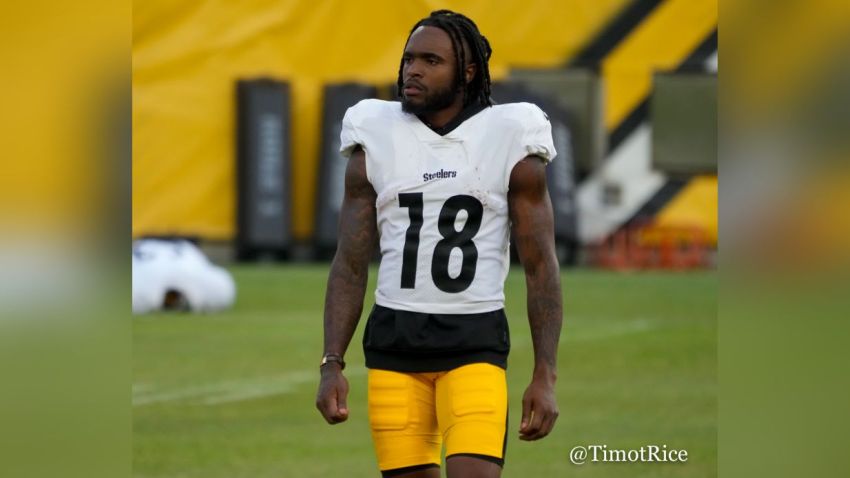 Diontae Johnson finished the day with 12 targets, catching nine of them for 105 yards (11.7 YPR). A common theme that the offense experienced throughout the game against Las Vegas was the lack of communication, or as Dave Bryan often calls it on the Terrible Podcast, “W-Fi” between QB Ben Roethlisberger and his receivers. There were several instances where Ben threw the ball well beyond where the receiver was breaking out of his route, leading us to believe that either the receiver messed up on the route or Ben thought the receiver was going to break to a different area of the field.

Diontae Johnson had a few of these issues staying on page with his QB, particularly this play early on in the game that the defense capitalizes on for the INT. Watch as Johnson aligns at the top of the screen near the left sideline and breaks out on the out route. Ben escapes pressure coming to him in the pocket and launches it down the sideline, making it appear as if Johnson needs to run the out-and-up concept if he is the intended target on the play to bring in this ball. Nonetheless, Johnson isn’t able to get up field in time and CB Trayvon Mullen Jr. picks of the pass and starts running the other way.

When we look at the end zone view of the play, I question whether Johnson is the intended target of Roethlisberger’s pass. You notice #19 JuJu Smith-Schuster streaking across the middle of the field on the deep over route, and Ben looks at Johnson near the sideline before he makes the pass. Thus, Roethlisberger knows that Johnson has stopped his route, and his intended target may be Smith-Schuster on the play. After all, Ben takes a big shot from a defender as he lets go of the pass, likely changing the release of the pass and the placement of the ball which could lead to the overthrow of Smith-Schuster. Johnson could easily be the target here but having JuJu in the same area complicates things.

Here is another missed throw later in the game where Roethlisberger and Johnson are clearly not on the same page. Johnson runs the comeback route back to the right sideline to get the first down whereas Ben throws the ball deep down the sideline, looking for a home run shot. Roethlisberger may be looking for Johnson to hit a stop-and-go concept and keep running down the sideline, but Johnson does a great job coming back to the sticks on his route, getting separation with the defender on his back pocket. Considering the single-high safety waits to commit until the ball is thrown, Ben likely is looking for the one-on-one down the field while Johnson commits to the comeback. Clear miscommunication overall by the offense.

Besides the miscommunication on a couple of throws and a false start penalty, Johnson had a good game. Over the last two weeks, Johnson has seen 22 targets and has had zero drops, a welcome sign of improvement from last season. He again looks to be Roethlisberger’s favorite target in the passing game, getting fed targets at a high rate. Check out this completion over the middle of the field as Johnson runs the quick slant from the top of the screen, getting easy separation against off-man coverage and catches the ball while #42 Cory Littleton comes in to try and interfere with the pass, avoiding him and falling forward for extra yardage.

Johnson saw similar utilization from last week’s game in Buffalo in the quick screen game as an extension of the running game. Watch as Johnson runs the bubble screen to the top of the screen, picking up blocks from JuJu Smith-Schuster and #11 Chase Claypool to advance the ball five yards.

Johnson also saw some usage deep down the field on Sunday as well particularly on this reception of 41 yards from Roethlisberger down the left sideline. Johnson gets an outside release on the defender in coverage, managing to stack him vertically while drawing the pass interference penalty as he runs down the sideline. Despite being interfered with, Johnson is able to track the ball and make the catch over the shoulder, having his momentum carry him out of bounds for the big gain on third down.

Much like Johnson’s acrobatic touchdown catch last week against the Bills, this reception by Johnson showcases his improved focus and ability to complete the process of the catch that he spent the offseason training on. Johnson runs a comeback route at the top of the screen on the right sideline, having the defender run with him in-stride until his puts his foot in the ground and whips back to Roethlisberger who is rolling out of the pocket. Johnson jostles for position with the defender as Ben throws the ball, placing it high over Johnson’s head rather than towards the sideline. Johnson quickly reacts to the pass coming his way and snags the ball out of the air through contact by the defender, moving the chains.

Now Johnson left the game Sunday with a knee injury he sustained on the last play of the game. On this play we see Johnson run the drag across the field as the other receivers run vertically, attempting to pick up blocks to spring Johnson up the sideline. Johnson catches the ball and runs toward the right sideline, trying to get to the corner as he is eventually brought down by #24 Johnathan Abram.

After watching multiple angles of the play and the position of Johnson’s leg as he was brought down, I personally didn’t believe that he sustained the dreaded ACL tear, or a long-term knee injury as has been reported on Monday. Johnson made contact with the ground with his knee bent, and there wasn’t any evidence of his knee buckling on contact. Knowing that Johnson knocked knees with a Bills defender last week, my realistic guess from a strength and conditioning perspective is that Johnson likely suffered a knee bruise or a knee sprain when he contacted the ground. Now the MRI may reveal a greater severity of injury for Johnson, but based on how he contacted the ground, I don’t believe the injury is serious.

Hopefully, Johnson is able to return soon should the knee respond well to therapeutic treatment and continue to play at a high level. The passing game in Pittsburgh revolves around him and his ability to create separation at all levels of the field, and his improved consistency catching the football is an encouraging sign of his continued development in Year 3. The offense needs to do a better job being on the same page with one another in terms of connecting on passes with Roethlisberger, but should Johnson return healthy soon, expect him to pick up where he left off against the Raiders by continuing a promising 2021 campaign.

What are your thoughts on Diontae Johnson’s performance against the Raiders? Do you think he is to blame for the missed throws by Ben Roethlisberger, or that the blame is to be shared? Can Johnson put together a strong campaign in 2021 giving he stay healthy? Please leave your thoughts in the comments section below and thanks again for reading!