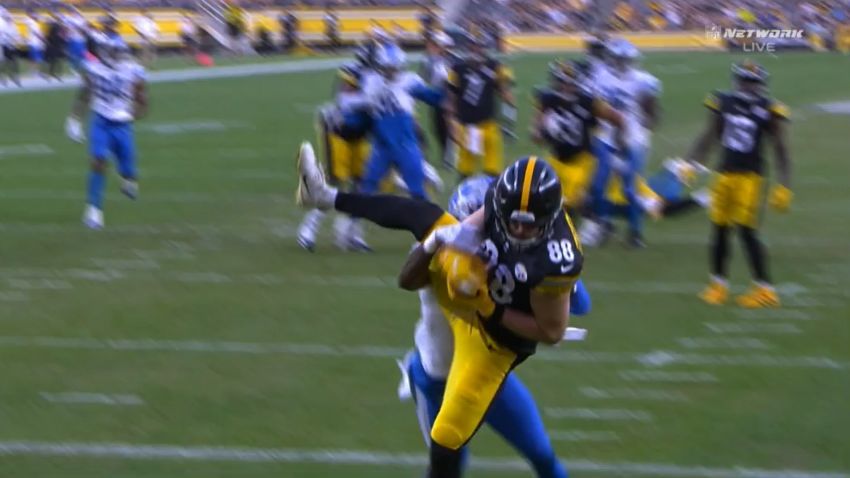 The Pittsburgh Steelers had eight of nine 2021 draft picks make the 53-man roster this year. Four of them were listed as starters on the team’s first official depth chart for the regular season, with the biggest surprise being second-round tight end Pat Freiermuth being listed as co-starter along with veteran Eric Ebron.

While it was always taken as a given that Freiermuth would have a role as a rookie, being given a starting designation, even as a co-starter, feels significant, but catching two red-zone touchdown passes from Ben Roethlisberger during the quarterback’s three preseason drives certainly doesn’t hurt.

The Penn State product has already shown that he has the potential to make an impact early on. In, fact, he was listed as a breakout candidate for the Steelers this year in a recent NFL-wide team-by-team article by ESPN. Brooke Pryor writes on the rookie tight end:

The Steelers could start three offensive rookies in Week 1: Freiermuth, RB Najee Harris and C Kendrick Green. While Harris is an obvious breakout candidate, Freiermuth isn’t far behind. He had a two-touchdown performance against the Lions, and afterward, Roethlisberger jokingly told the media to stop talking about him so he could stay under wraps a little bit longer. Good luck with that.

Freiermuth drew comparisons to TE Rob Gronkowski in high school and college, but he reminds Roethlisberger and the Steelers faithful of another dominant tight end: Heath Miller. Freiermuth earned accolades for his blocking, but he could also be a fierce red zone threat. In a Matt Canada offense that heavily utilizes tight ends, Freiermuth is poised for a big rookie season.

I’m not quite sure that Freiermuth ‘earned accolades’ for his blocking; in fact, that phase of his game remains very much a work in progress, though that is hardly a surprise, and he has certainly displayed the ability and willingness to become a reliable, plus blocker.

Roethlisberger does like to throw to athletic tight ends with some movement to them, so it wouldn’t be a surprise if Freiermuth does find himself a favorite target of the 39-year-old veteran early on. It doesn’t hurt that his locker—which previously belonged to Roethlisberger’s dear friend, retired tight end Vance McDonald—is right next to his.

Freiermuth is the first homegrown tight end in which they have significantly invested in some time. Prior to his selection, they had not selected a player at the position earlier than the fifth round since Matt Spaeth all the way back in 2007. It was assumed as soon as he was drafted that he would be the future of the position, but perhaps he will also be the present as well, more than originally predicted by most.