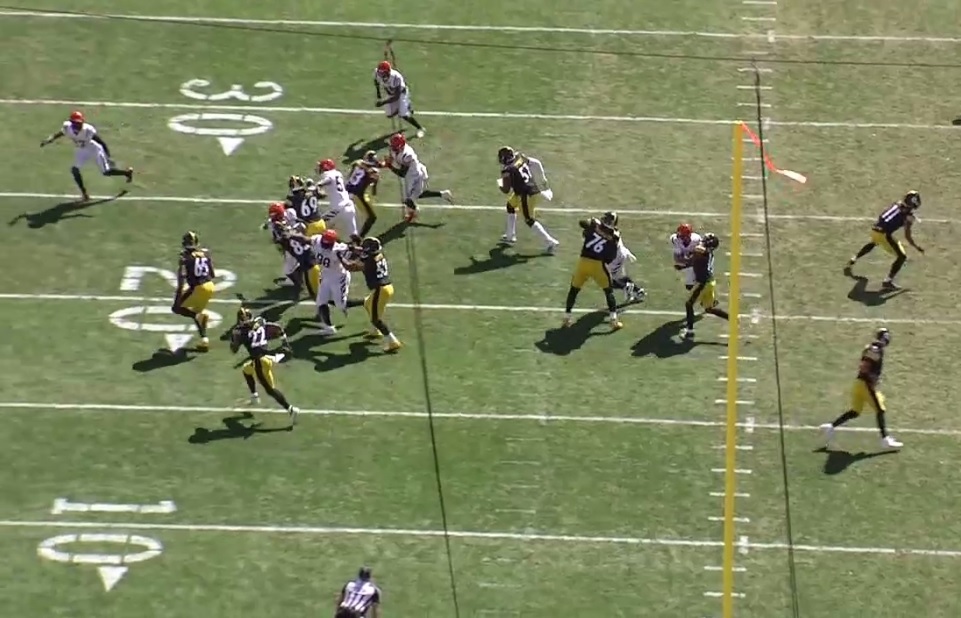 With Week 3 of the 2021 regular season in the books, we are now beginning to see patterns and issues of this 2021 Pittsburgh Steelers offense. Quarterback Ben Roethlisberger has looked poor, the offensive line has struggled, the running game is minimal, and the wide receivers have not been able to provide enough splash plays with Roethlisberger in the passing game.

Let’s dive into the quarterback position with these datapoints from Next Gen Stats for context: 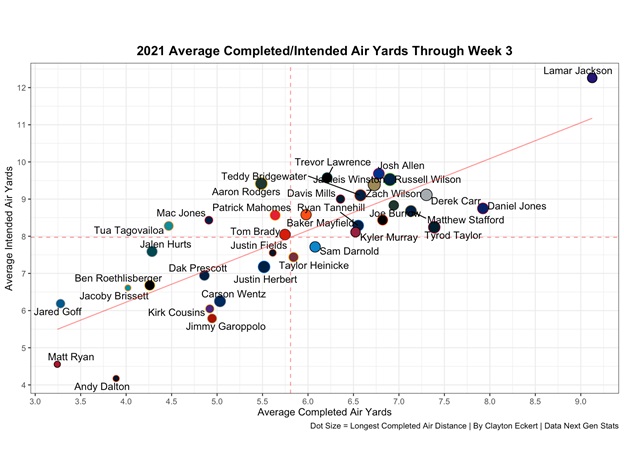 Roethlisberger lands on the bottom left of the graph as expected, and the first thing that jumps out is the low 4.3 average completed air yards stat which ranks 31st out of the 35 quarterbacks. Looking at the results before the Bengals game in Week 3, Roethlisberger was at least attempting more throws downfield but with little success. This highlights how much of a dink and dunk game the offense played against Cincinnati, and how predictable the passing game was with the average intended air yards dropping below seven yards for Roethlisberger.

The Steelers offensive line has allowed so many quarterback hits through three games, and this seems to already be taking a toll on Roethlisberger’s body too early in the season. One of Roethlisberger’s two interceptions was due to being hit on the throw, and his below average mobility really effected the game with poor results extending plays overall. It is important to remember that the Steelers were without wide receiver Diontae Johnson along with JuJu Smith-Schuster, center Kendrick Green, and tackle Chukwuma Okorafor leaving the game due to injury, but this does not account for all the concerns with Roethlisberger and this offense.

I consider myself an optimistic guy but going off the facts so far in 2021, I will believe the Steelers offensive line can improve when I see it. Hopefully I am wrong and the next few games we will at least see some improvements, especially from rookie offensive lineman Kendrick Green and Dan Moore Jr. even if they aren’t monumental, and maybe even getting offensive lineman Zach Banner in the lineup when he is healthy. Whatever the decisions are moving forward, the Steelers really need to figure out solutions quick to hopefully help the offense and team trend upward. Defense and special teams can only do so much to win football games, and while I am hopeful and understand they need to play better, the Steelers offense needs to find some life somehow in order to turn things around. 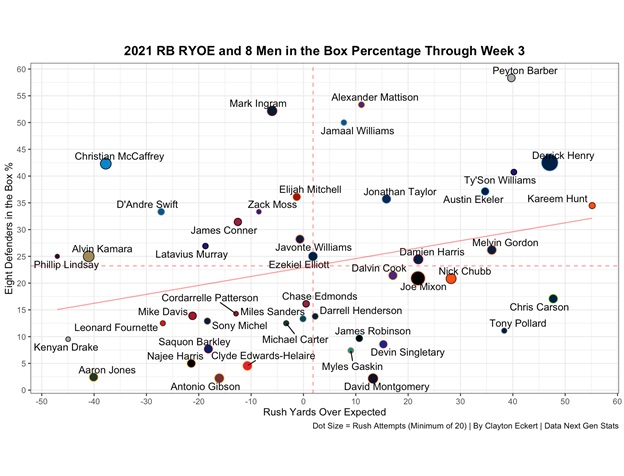 Steelers running back Najee Harris did have a good outing in the dink and dunk passing attack, but looking at the running game is discouraging to say the least. Harris continues to see less defenders in the box trying to stop the run, ranking 40th out of the 44 running backs on the graph. This highlights the offensive line’s struggles to provide opportunities collectively and when they do the plays have often called back on penalties. The Steelers coaches did try changing things up with alignments and personnel, but the situational play calling and decision making through the game did not set the players up to succeed in my opinion. Here’s to hoping the Steelers offense can have a stronger start and game plan for the game against the Packers in Week 4, since playing from behind and having to abandon the running game will likely lead to another loss as it has in the Steelers last two games.

To close, I wanted to look at the following wide receiver data points: 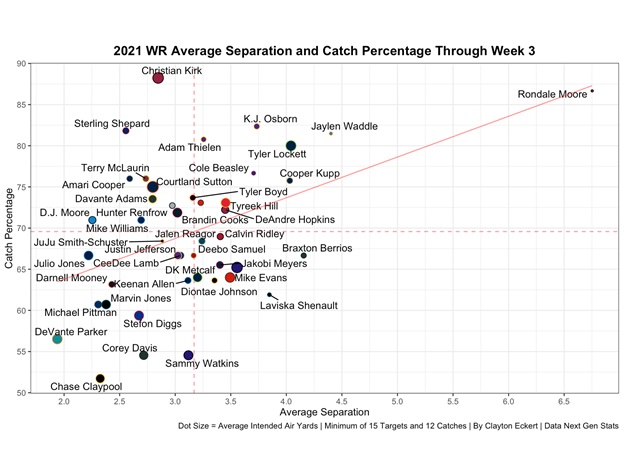 Steelers wide receiver Chase Claypool continues to land at the bottom left of the graph, highlighting the lack of separation and a dead last rank on the graph in catch percentage which highlights the inability to come down with throws from Roethlisberger throughout the 2021 season thus far. This is especially concerning due to him being targeted the most downfield and reiterates the low completed air yards stat for Roethlisberger. Steelers wide receivers Diontae Johnson and JuJu Smith-Schuster have fared better with the data points, but in the dink and dunk variety highlighted by their dot sizes. Drops also plagued the Steelers against the Bengals, paired with the penalties, turnovers, and lack of a running game made the Week 3 matchup hard to watch.

Injuries were obviously a factor in this game, especially missing linebackers T.J. Watt and Alex Highsmith on defense. Here’s to hoping we see a cleaner injury report as we get through this week and hopefully see a bounce back performance from the Steelers in their week four matchup against the Packers.