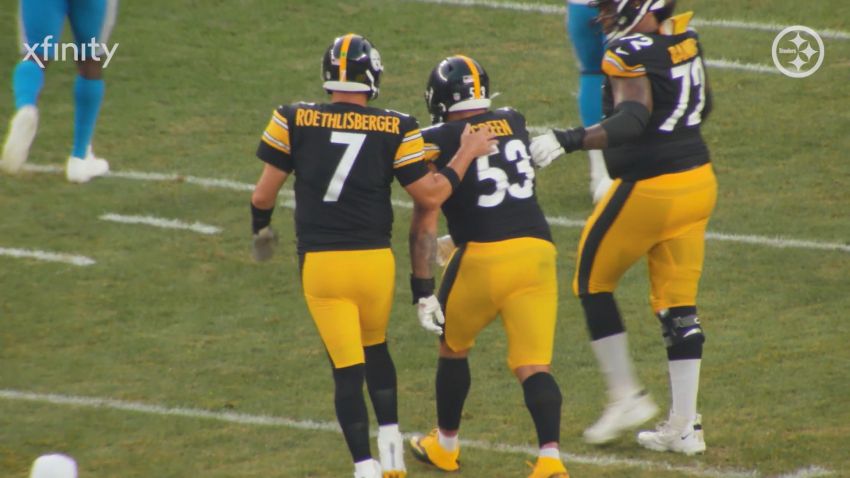 The Pittsburgh Steelers announced earlier today that tackle Zach Banner returned to practice, meaning that he should be activated from the Reserve/Injured List at any point over the course of the next three weeks, and is potentially eligible to play in their upcoming game.

Projected to be the right tackle this year, Banner was coming off of a torn ACL that he suffered in the 2020 season opener. After playing 12 snaps in the preseason, he appeared to have a setback, and started the season on reserve, but is now on the clock, having resumed practice.

“It was great to have him back”, left tackle Dan Moore Jr. said earlier today. Moore benefited from his absence, in that it plugged him in at left tackle, with Chukwuma Okorafor moving to the right. “He’s happy. He’s always happy. Zach’s always an uplifting guy, whether he’s out there or not, he’s gonna be Zach”.

It remains to be seen exactly what happens at the tackle positions going forward, with Moore and Okorafor currently starting. Okorafor suffered a concussion in this past week’s game, so it is unknown what his availability will be this week. Joe Haeg took his place when he exited the game.

Banner is, with the exception of Trai Turner, who is in his first season with the team, the most veteran lineman on the Steelers, and that is a role that he has taken to heart this offseason with the departure of long-time veterans like Maurkice Pouncey and David DeCastro.

Moore said that he has “definitely” been a leader in the room, even when he is not on the field, “vocally, by example, by the way he works. He tries to get a good example for me and Kendrick [Green], being young guys, and kind of take us under his wing. He’s been good with that for sure”.

Banner has made exactly one start in his five-year NFL career as an offensive lineman. That was last season’s opener, having been named the starter at right tackle during the preseason, and that is when he tore his ACL, as mentioned earlier.

He was projected to resume that role this season before his apparent setback sidetracked him. It is unknown whether or not he will be re-installed into the lineup, or if he will take over the tackle-eligible role, which I’m not sure they have even used yet this season.

But it certainly would not be a bad thing to have options. The entire offensive line has been below the line, the Achilles’ heel of this team. So much remains unknown about Banner and his capability as a starter, but at this point, would it hurt to find out?