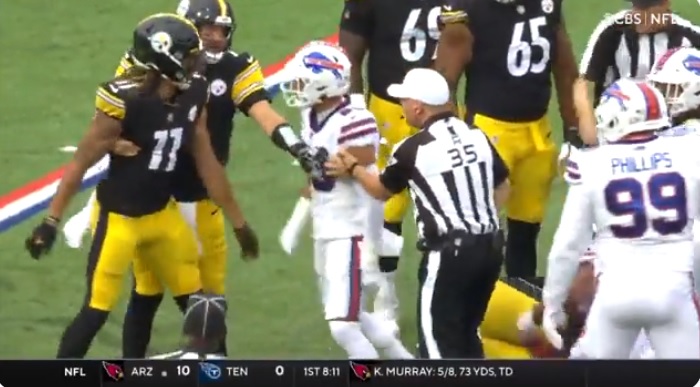 Chase Claypool’s wallet is a little bit lighter after the Pittsburgh Steelers’ Week One win over the Buffalo Bills. According to NFL Network’s Tom Pelissero, Claypool has been fined $8,354 for unsportsmanlike conduct against the Bills last Sunday.

Meanwhile, #Steelers WR Chase Claypool was fined $8,354 for unsportsmanlike conduct in an early dustup against the #Bills. https://t.co/u8QQI3sHFA

Presumably, that fine stems from Claypool pulling Bills’ safety Micah Hyde off the pile following a Steelers’ first-half fumble. Hyde shoved Claypool back but was not flagged. Only Claypool’s action was called, pushing Pittsburgh back 15 yards and now, making Claypool pay up to the league.

Fine numbers are predetermined by the league and increase by a percentage over the course of the CBA, leading to the very specific $8,354 figure. All fine money is donated by the NFL to charities of their choosing. That fine is nearly 16% of Claypool’s weekly base salary.

Claypool finished the game with three receptions for 45 yards while drawing one pass interference call. As of this writing, he’s the first and only Steeler to be fined Week One.