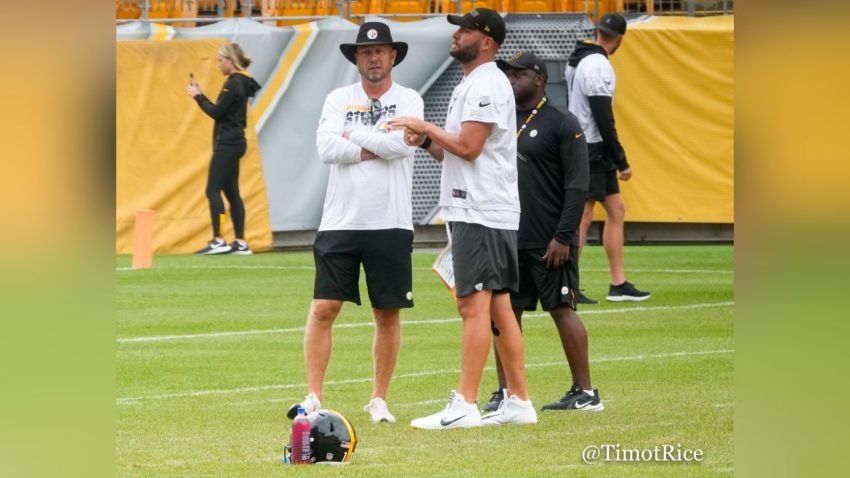 The Pittsburgh Steelers must be more efficient and more productive. To Matt Canada, it simply means them being on the field more. The Steelers’ offense simply hasn’t run many plays through the first two weeks, speaking to the growing pains this unit is experiencing. More plays likely equals more success and is Canada’s goal, he told reporters Thursday.

“We have to be on the field more,” Canada told reporters via video provided by the team. “Our number of plays has been too low. Two weeks ago, we had a blocked punt. Ok, maybe that was part of it or whatever.  We’ve got to do a better job staying on the field. So obviously there’s third down. Part of that is running the ball. There’s a lot of different things you’d look at. So I don’t want to narrow it down to one, but we have to be better.”

Over the Steelers first two games, they’ve run just 111 plays from scrimmage. That’s 28th in football. Teams behind team include the likes of the Chiefs, Rams, and Seahawks, but those are stellar offenses with low play counts because of their big-play ability. The Steelers’ offense isn’t in that camp. Pittsburgh’s averaging just 26:10 in time of possession, 28th in the league, putting additional stress on a Steelers’ defense suddenly dealing with a mounting number of injuries.

As we’ve mentioned throughout the week, the Steelers issues begin on first down. A poor 1st-and-10 offense struggling to put them in even second and medium which is leading to third and long. All resulting in a third down offense converting just over one-third of the time, leading drive after drive to stall out if it gets going in the first place.

First half struggles have been particularly pronounced. Issues on opening drives still exist and the offense has produced just seven points in the first half over the first two games, shut out against the Bills while recording one touchdown versus the Raiders. It’s caused the team to play from behind through both games.

While Canada said the team has been close to seeing results they want, it doesn’t mean anything until they start actually executing.