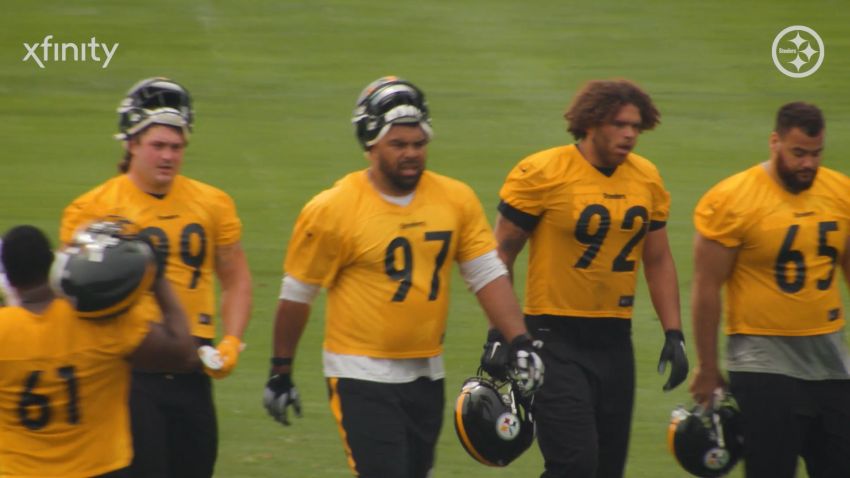 At 32 years old, Pittsburgh Steelers defensive lineman Cameron Heyward continues to play some of the best football of his entire career. While he has 11 tackles, a sack, a forced fumble, and three batted passes so far, the numbers don’t really show you just how well he has been playing.

But more isn’t always more in terms of the relationship between playing time and performance. The Steelers are trying to have more of a rotation along the defensive line, but injuries are complicating that. Stephon Tuitt started the season on the Reserve/Injured List, and it’s not clear how soon he will be back. They lost Tyson Alualu, likely for the season, to a fractured ankle on Sunday. They still have six linemen, calling up Henry Mondeaux from the practice squad, but how will that impact playing time?

“I hope it’s not more snaps, but the more guys we lose, it gets harder”, Heyward acknowledged yesterday, speaking to reporters. “Younger guys have got to be willing to step up. I’m not asking them to take the bulk of the reps, but we’ve just got to have guys that are able and know what they’re doing out there”.

The ‘younger guys’ includes fifth-year veteran Chris Wormley, in his second season with the Steelers, who has been starting in Tuitt’s place. With Alualu down, Isaiah Buggs, now in his third season, will take over at nose tackle. Carlos Davis looks like he’s going to be down, however, which will mean that both rookie Isaiahh Loudermilk and the second-year Mondeaux will dress as the fourth and fifth linemen.

Heyward played exactly 56 defensive snaps in each of the first two games of the season. But those 56 snaps were just 66 percent of the total defensive snaps in Week 1 against the Buffalo Bills. In contrast, it marked 85 percent this past week against the Las Vegas Raiders, so his snap-to-rest ratio ticked up sharply last week due to the early in-game injury of Alualu.

With a week to prepare with Wormley, Davis, Mondeaux, and Loudermilk ready to go, they won’t be forced to play a body short for almost an entire game like they did last week. But it remains to be seen how much can be put on their plates.

“The biggest thing I’ve had with Tuitt and Tyson is trust. We’ve built that over the years”, Heyward said of what is lost without the two long-time veteran defensive linemen he’s played alongside. “It’s time for the younger guys I can build trust in and see what they can do on a snap-to-snap basis”.

Given that there are also injuries to the outside linebackers to contend with, the front four can be rather slim this week, which is pretty concerning, and the Cincinnati Bengals’ offensive line this year is looking better than it has in several years, so the timing could certainly be better.