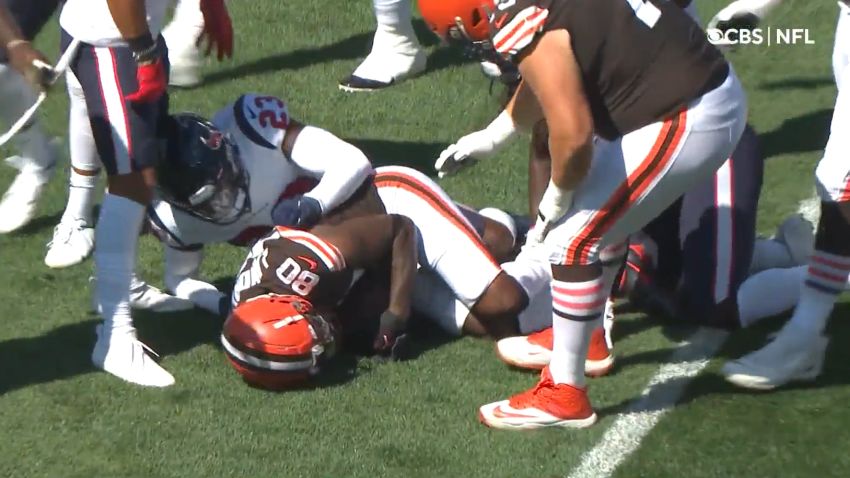 In comes one, out goes another. While it appears that the Cleveland Browns are on track to gain wide receiver Odell Beckham Jr. after missing the first two games of the season—and most of last season—with a torn ACL, the reigning third-place-defending AFC North squad placed another one of their high-dollar wide receivers on the Reserve/Injured List.

That is where Jarvis Landry now resides for at least the next three weeks after he was moved there on Tuesday, having suffered a knee injury in the Browns’ victory over the Houston Texans. The injury occurred on just the second play of the game for the offense, after catching one pass for nine yards.

Quarterback Baker Mayfield, who himself was injured in the game but returned, finished the day completing 19 of just 21 pass attempts for 213 yards, with one touchdown and one interception, leading the offense on four touchdown drives, including three of 75-plus yards.

Cleveland remains a run-first offense, the Browns accounting for 34 carries in their win over Houston. Nick Chubb rushed for 95 yards and a touchdown on just 11 carries, while Kareem Hunt added another 51 yards on 13 attempts.

Mayfield has attempted just 49 passes through two games, the lowest among all starters in the NFL who have not gotten injured and missed significant time already, tied for 29th overall with Andy Dalton of the Chicago Bears.

He has completed 40 of those pass attempts for 503 yards, averaging 9.5 net yards per pass attempt, so the passing game has been efficient when used, even if they have just one touchdown pass so far against two interceptions. But the run game has produced seven scores, the most in the NFL.

By yardage, tight end David Njoku is their leading receiver with 94 yards on five receptions. Landry has six receptions for 80 yards, the majority coming in week one. Rookie wide receiver Anthony Schwartz has three receptions for 69 yards.

Will the return of Beckham help the Browns have a stronger run-pass balance? In the two-plus years that he has been here, they haven’t had him on the field fully healthy very much. He’ll likely still need a few games to play his way into shape, considering they weren’t comfortable with where he was even just a couple of days ago.

Landry was first acquired via trade in 2018. He has recorded 242 receptions in 49 games since joining the Browns, for 3,070 yards and 13 touchdowns. In his first four seasons with the Miami Dolphins, he caught 400 passes for 4,038 yards and 22 scores.