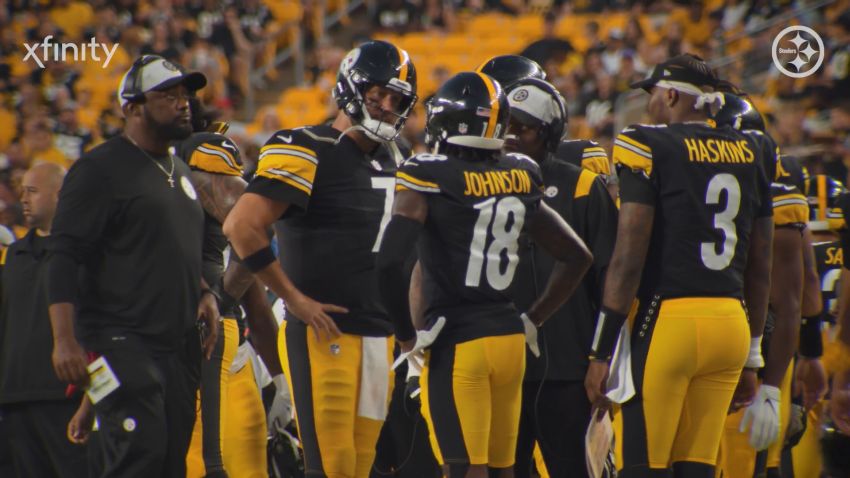 At 39 years old, Pittsburgh Steelers’ quarterback Ben Roethlisberger has seen a thing or two in the NFL.

Entering his 18th season overall in the black and gold, Roethlisberger is the elder statesmen on the roster, which allows him to impart wisdom onto some of the younger players. Though he has received some criticism in the past for the way he addressed players through the media in his radio show, along with Kevin Colbert’s comments about Roethlisberger being the adult in the room a few seasons ago, the veteran quarterback said he still sometimes feels like a teacher on the field.

On an offense with an average age of 24.2 years old, in terms of starters not counting Roethlisberger, it shouldn’t be a surprise that he sees himself as a teacher at times on the field. In fact, the second-oldest starter on the offense is 28-year-old right guard Trai Turner, who is 11 years younger than Roethlisberger.

So, to hear Roethlisberger make those comments to the media Wednesday, it shouldn’t be a surprise to see Roethlisberger interacting to heavily on and off the field with players on offense.

“Sometimes. I’m still trying to learn it too,” Roethlisberger said to the media. “It’d be one thing if I was helping these guys learn an offense that I knew like the back of my hand, but we’re all learning together. We’re all going through the growing pains together. The only advantage that I have over these guys really is that I’ve been doing it for a while. I kinda know what to expect when I step into a stadium. It was fun even in the preseason, being able to talk to Naj[ee Harris] and some of these guys about how it feels different. ‘I know you went to Alabama; I know you went to a big school. There’s something different about stepping into an NFL stadium.’ As we all know—anyone that’s covered football like you guys have for a while—you go to a preseason game and it’s got a feeling, but you get to the regular season, it has a different feeling too. Everyone’s going to be nervous. The guys, when I ask them, if they tell me they’re not nervous I call them a liar because I’m nervous and I’ve been doing it for a long time. It’s going to be fun.”

Learning a new offense can be challenging, but not much has truly changed with the offensive scheme and play-calling, if we are to believe some of the players at face value. Terminology has certainly changed, but the shape of the system remains very similar, which it should considering Roethlisberger is nearing the end of his career and it’d be silly to ask a 39-year-old quarterback to learn something entirely new.

While Roethlisberger routinely gets knocked as a leader, few can truly dispute his impact as the leader and face of the franchise. Even during the preseason game against the Lions, Roethlisberger can be seen and heard addressing offensive players, talking about what he likes, wants to see, how to run routes and react after scoring players throughout the Steelers’ ‘The Standard’ series on the team’s YouTube page.

For better or worse, he is a teacher on the field, one that the Steelers’ young players have embraced and gone into battle for. Here’s hoping they all have passing grades come the end of the season.