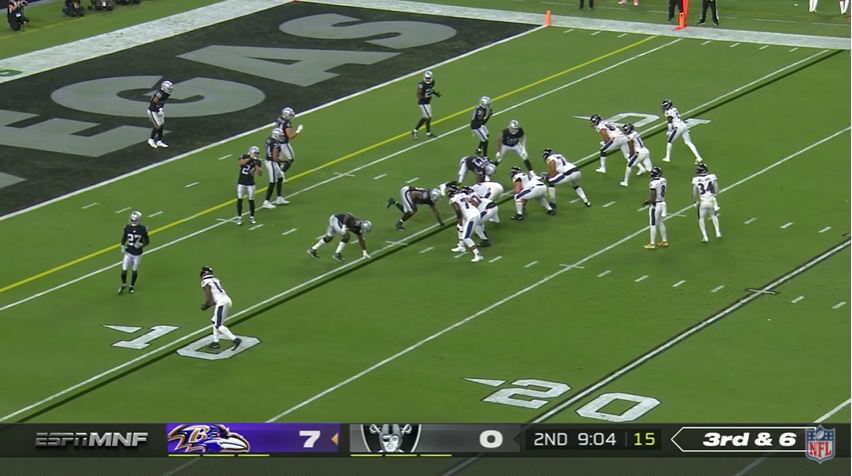 Splash plays.  Every team wants them but how do they happen? This article is going to look at the defense of the upcoming opponent focusing on the three big plays they allowed the previous or recent weeks. It’ll take a look at the whole play including details such as personnel, formations, blocking schemes and route combinations. As a follow up to each play, there will be the Steelers scenario identifying the player or players who could benefit by running similar plays.

The Ravens line up with a receiver to the left and three to the right of the formation. The quarterback in in the pistol formation with the running back aligned behind him.

Tight end Mark Andrews (89) is lined up as a wide receiver to the left and to the right Marquise Brown (5) is in the slot with Sammy Watkins (14) lined up wide. Fullback Patrick Ricard is in the tight slot to the right and running back Ty’Son Williams (34) in the backfield.

Before the snap, Ricard will go in motion to his left and will end up as a blocker on the left edge. Quarterback Lamar Jackson (8) will open to his left and then fake a hand off to Williams. This will hold the linebackers a second before they drop into Zone coverage.

Andrews will run a short curl route that pulls up the corner Trayvon Mullen (27) preventing him from dropping into his Cover 3 area. Brown and Watkins will run mirrored In routes behind the drawn up linebackers and in front of the deep coverage. Jackson will hit Brown about 17 yards downfield in the area vacated by Mullen leading to a 29-yard gain.

Steelers Scenario – The Steelers didn’t run 21 personnel in Week 1 but they could also do it with 12 personnel. In 2020, Juju Smith-Schuster and Diontae Johnson were usually the WR in 12 personnel. Split Pat Freiermuth to the right and use him in the Ricard role to block on the edge. Use Eric Ebron split left running the curl. Johnson would be on the outside with Smith-Schuster in the slot and Ben Roethlisberger could hit JuJu for the big gain.

To the left they have Devin Duvernay (13) lined up outside with Trenton Cannon (39) in the slot. To the right, Brown is lined up wide to the right, Watkins is in the slot and Andrews is in the tight slot. The Raiders drop into a Cover 3 look deep with a matchup Zone underneath.

Duvernay and Cannon will run intersecting routes with Duvernay moving inside to run the Post will Cannon moves to the outside running a Go route. Brown runs an In route on the right and Andrews runs a Curl to the middle drawing both linebackers toward him. Watkins will run an In route underneath Andrews and with the two deep routes to that side he has plenty of room to run after the catch taking a five-yard pass and turning it into a 29-yard gain aided by a good block by Cannon downfield.

Steelers Scenario – The Steelers would likely line up Chase Claypool to the left with Najee Harris to run the deep routes. Ebron runs the curl to the middle with Johnson running the outside route. Again, Smith-Schuster is the beneficiary in the slot for another big gain.

The Ravens line up with 3 receivers to the left and a FB/TE lined up inline to the right. The quarterback is in the pistol formation with a running back lined up behind him.

Full back Ricard is lined up as an inline tight end to the right and running back Latavius Murray (28) is behind Jackson. To the left they have Andrews lined up outside, Brown is lined up in the slot and Watkins is inside him tighter to the formation.

Ricard to engage at the line of scrimmage before running a quick out and Murray will run to the flat on the same side. They are covered by linebacker K.J. Wright (34) and Mullen leaving the deep right open. Andrews will run an In route and Brown and Watkins will run Post patterns. Running the dual Post routes put the rookie safety Tre’Von Moehrig (25) in a difficult position to choose one or the other while linebacker Nick Kwiatkoski (44) tries to fill the deep right area.

Watkins notices it is him against the linebacker and gets over the top of him and Jackson hits him on the numbers up the right side for a 49-yard gain.

Steelers Scenario – This is another play where the Steelers could use 12 or 21 personnel but 12 fits better. Line up Ebron to the right and Harris in the backfield to run the short routes to the right. Use Freiermuth wide to the left, Johnson in the slot and I like Claypool tight. Johnson and Claypool run the deep routes and you have in the same scenario Claypool with make the play.