The Pittsburgh Steelers come out of Week 2 with a record of 1-1. After the loss to the Las Vegas Raiders and contemplating some weaknesses we have seen thus far, I wanted to provide some context to quarterback Ben Roethlisberger’s third down conversion percentage and see how he has fared through two games compared to the rest of the quarterbacks league. With that in mind, let’s take a look at the following datapoints: 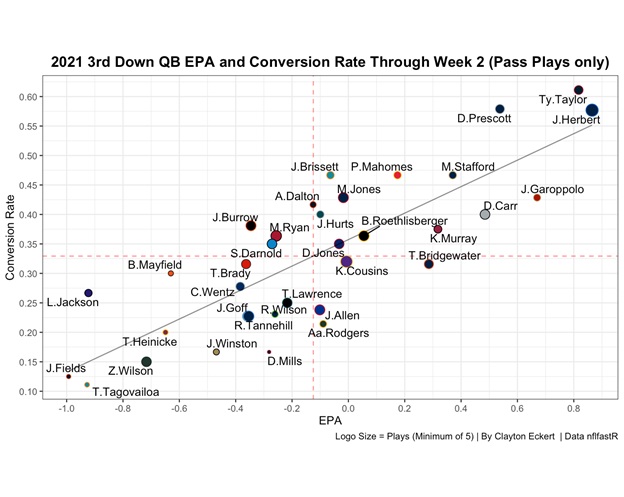 While this is a small sample size, I really enjoyed the context and which quarterbacks have extended drives and added EPA value with their arm in these situations. Considering coach Mike Tomlin mentioned not playing well enough on possession downs against the Raiders, I was curious to see what these numbers looked like including the Bills matchup in Week 1. Ben Roethlisberger has a third down conversion percentage of 36% so far this season, which ranks 16th out of the 35 quarterbacks on the graph. This is obviously an important element of the game to improve on, and we have seen many short and failed drives so far in the 2021 season. Roethlisberger is dealing with a left pec issue following the Raiders game in which he took a ton of hits. It will be very interesting to monitor his participation at practice and status on the injury reports this week and knock-on-wood he is good to go by Sunday.

I am also curious to see what the run/pass ratio on third down looks like as we get further into the season. Running back Najee Harris has had only one third down rush which he converted.

We can also see that Raiders quarterback Derek Carr has fared well in his first two games on the top right of the graph, especially in the EPA category which highlights plays like the long touchdown by wide receiver Henry Ruggs against the Steelers in Week 2. Bills quarterback Josh Allen has played below expectations since he faced the Steelers in week one, and also wanted to point out Cincinnati Bengals quarterback Joe Burrow’s results in anticipation to Pittsburgh’s week three matchup.

What are some of your favorite takeaways from the quarterback results? Do you think the Steelers will improve on third downs against the Bengals?

Now let’s look at the receiving side of the equation, who has Roethlisberger been most successful throwing to on third down and some other datapoints for additional context: 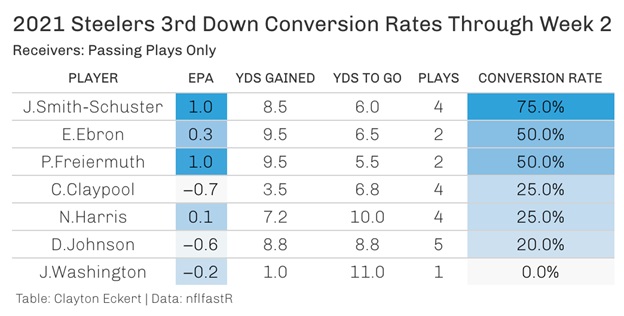 We can see from the table that wide receiver JuJu Smith-Schuster has provided the strongest results so far, leading in conversion rate and EPA. Tight end Pat Freiermuth also has a top EPA score on his opportunities along with JuJu, something that I hope to see grow as Roethlisberger and Freiermuth get more time together as the season progresses. Roethlisberger has targeted wide receiver Diontae Johnson the most on five plays, but only one of those plays was converted. The most frustrating opportunity was the play that Diontae Johnson stopped on his route against the Raiders which led to an interception. This highlights a general observation of miscommunications on routes and gives additional context to Ben’s low third down conversion rate.

Wide receiver Chase Claypool has the lowest EPA score on his four targets and only one conversion, joined by Najee Harris with the same number of targets and conversions but a stronger EPA score. Two of Claypool’s third down opportunities were deep incompletions, and really hoping the deep connection with Roethlisberger improves in general, but especially on crucial third down situations. Najee Harris’ one success was a big one though, against the Raiders on a short throw and run along the sideline for 25 yards with a nice dive to get his first NFL touchdown!