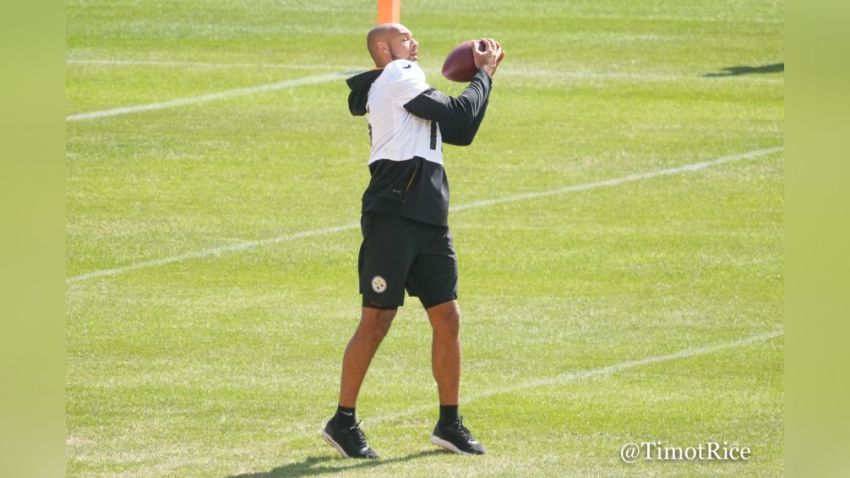 One man’s misfortune is another man’s opportunity. That’s what Mike Tomlin’s said. And whether it was days off, injury, or anything else, often times Cody White was ready to step up and step in. A backup wide receiver with only a slim chance to make the 53, he’s making the most of his odds to stick around by offering plenty of versatility on the roster.

White spoke with reporters after Wednesday’s final camp practice about what he can bring the team.

“It’s been good,” he said of his increased role in recent days. “Being able to get some first team reps and being able to know all the positions and be able to play everywhere on the offense. And also I’ve been playing all four core special teams. So trying to get a spot anywhere that I can.”

White has lined up all over the Steelers’ offense, logging time on the outside and inside as a “big slot” type of receiver that’s becoming more and more popular these days with JuJu Smith-Schuster being one of the better such guys in the league.

That versatility may be one of the biggest reasons why White is still a Steeler. Surviving the initial five cuts, of which now former teammate WR Isaiah McKoy did not. White also made it through an early training camp injury that would often spell the end of a young/fringe player’s chances. He missed about the first two weeks of camp due to a hamstring injury, not suiting up for practice until August 8th. That put him behind but he’s caught up, showing sure-hands and making difficult grabs, including a pretty snag in 7-on-7 during today’s practice.

“I ran a corner route and I jumped over Sutton and made the catch on the sideline and tapped feet down. Making plays like that every day and just leveling up and showing them what I’m capable of is something that’s really important throughout this training camp.”

It’s still a crowded room to even make the practice squad. Anthony Johnson has had an excellent camp, better than White’s, and he offers a similar skillset as a big-bodied, versatile wideout with higher special teams value. There’s also Mathew Sexton, a bursty slot option with return value along with Rico Bussey, who might be the best pure wide receiver on the team, though the impressiveness of his camp has been overstated.

The Steelers will be allowed to keep 16 players on the practice squad this year which should allow them to keep at least two receivers, maybe three, but White will have to continue to ascend these next two weeks.