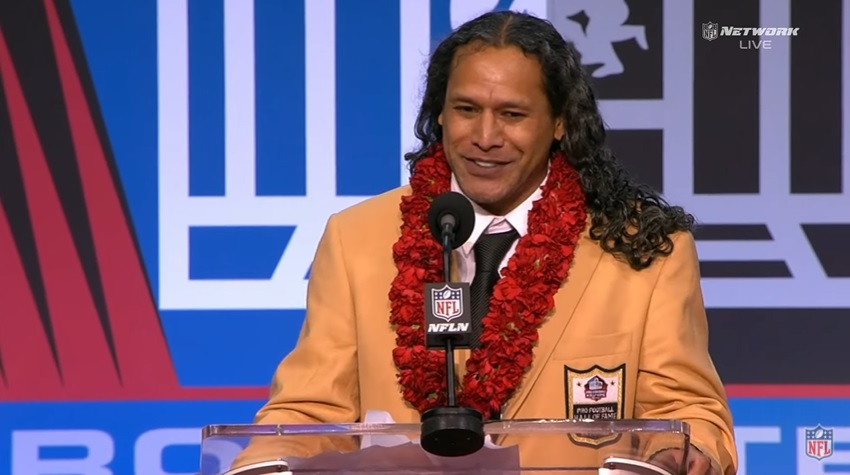 Hines Ward was a rare type of receiver. Not the biggest, not the most athletic, the guy didn’t even have ACLs. But few played the game like him. Every Steelers fan knows this. And in his rookie year, Troy Polamalu found out the hard way.

In an incredible Hall of Fame speech Saturday, Polamalu recounted his first padded practice as a Steeler. And an unforgettable encounter with Hines Ward.

“My first real introduction to the NFL was that our first full padded of practice when Hines Ward and I hit,” Polamalu shared. “Listen, it was my legs that subsequently buckled. And he helped me up like a toddler and said, ‘I’m not like any other wide receiver.’ No doubt, Hines.”

If only we had footage of that play — it probably exists in some back room of the Steelers’ facility. Ward and Polamalu were among the two most physical Steelers of those great teams, a high bar considering the hard-hitting talent that surrounded them. The NFL had to change its rules to reduce Ward’s physicality while Polamalu was a terror for QBs, running backs, and receivers alike. Both players spent their entire NFL careers in the black and gold and are among the most legendary players in franchise history.

Polamalu finished his story by advocating for Ward’s place in the Hall.

“I look forward to sharing the stage with you one day.”

Though Ward’s yet to join him in football history, he’s in attendance this weekend. Alan Faneca chose Ward to be his presenter into the Hall. Like Polamalu, I’m sure Faneca will make his case for Ward’s induction, though his path to Canton has proven to be a difficult one. Then again, many of this week’s enshrinees had long waits: Faneca, Bill Nunn, and Donnie Shell were all long overdue.

Check out the entirety of Polamalu’s Hall of Fame speech by clicking the link here.