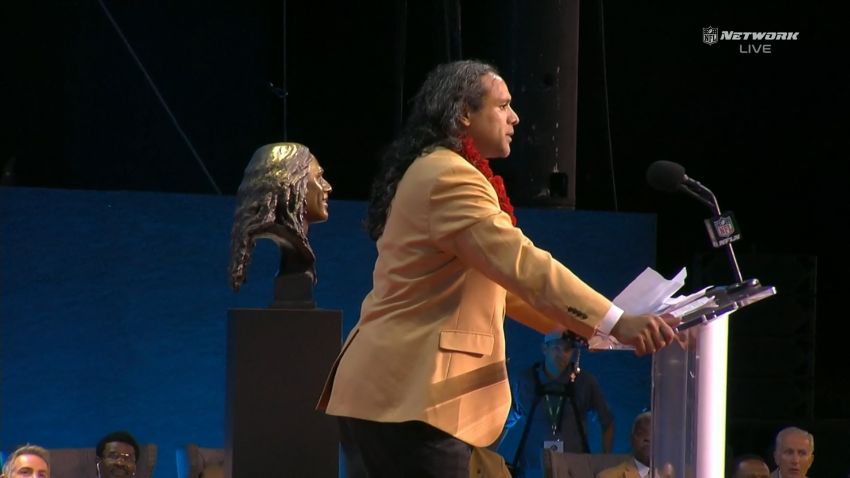 Tradition and legacy mean a great deal to Troy Polamalu. That was incredibly apparent during his induction speech last night as he was enshrined into immortality as a member of the Pro Football Hall of Fame. The primary theme of his speech was simply what it means, and means to him, to be a Pittsburgh Steeler.

“Mike Logan, the starting safety my rookie year, shared his full knowledge of the game, whole-heartedly showing a level of humility that helped shape my career”, he said at one point during his speech. “Like many other teammates, his selflessness paved a greater opportunity for others at his own expense”.

Logan was a former second-round pick of the Jacksonville Jaguars who joined the Steelers in 2001. He worked his way into the starting lineup in 2003, the year the Steelers traded up to draft Polamalu, who would take his job the next year.

“It is unnatural in the most competitive environment to train your replacement, yet this is our culture—Steeler culture”, Polamalu said. “These virtues I learned while playing with the Steelers are what make the legacy of the black and gold timeless. They are passed down in the locker room from the Steel Curtain to anyone who valiantly wears the back and gold, creating a brotherhood that is deeper than money, business, and winning”.

Over the course of his own 12-year career, he would start 142 of 158 games, which is every game he played after his rookie year. His numbers don’t even quantify his legacy, and that also includes what he did for others that doesn’t show up in stats.

“To be a Steeler is to consider others before you consider yourself, to protect your brother, even from himself; to give support at your own expense”, he said. “And when wearing the black and gold suit of armor, make sure nobody desecrates it, disrespects it. Most importantly, we ourselves don’t dishonor it”.

“The only approval any Steeler should seek is to earn the approval of previous legends to have donned the black and gold. And if you’ve really earned their respect, they’ll say, you could’ve played with us’”.

That can’t be said of every great player. Not everybody is capable of transcending eras. Polamalu is certainly one who did. He and Donnie Shell could have made a great safety pairing covering for Joe Greene, Jack Lambert, and Mel Blount. There is no higher compliment for a Steeler than that.