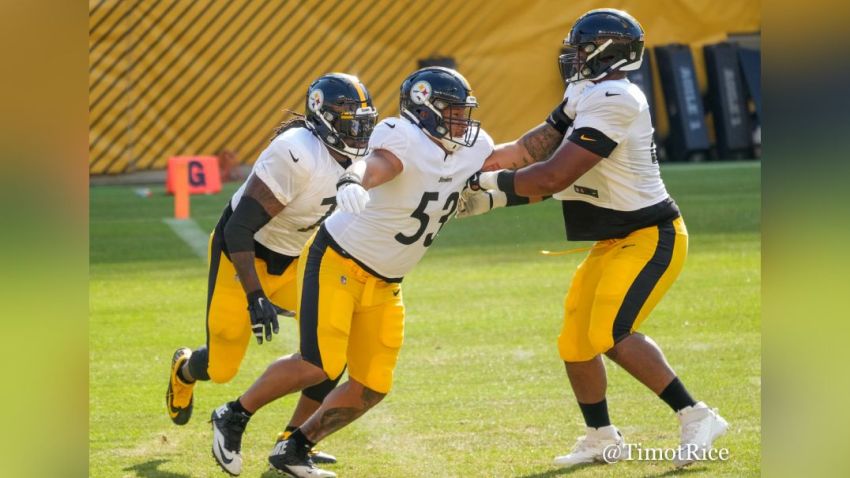 The importance of veteran leaders and mentors to an NFL rookie is incredible. Ben Roethlisberger had Tommy Maddox and Charlie Batch. Ryan Shazier had Lawrence Timmons. In his Hall of Fame induction speech Saturday, Troy Polamalu explicitly thanked Mike Logan, the veteran safety whom he was drafted to replace in the starting line, for his leadership and teaching during Polamalu’s rookie season.

Kendrick Green nearly didn’t have that with the Steelers this year as a rookie. Drafted in the third round and thrusted into the lineup as the team’s starting center, Green was centering an offensive line where only one projected starter had experience as a full-time starter — and Chukwuma Okorafor has only last season in that role. The faces that could have shown him the ropes as long-time stars for the Steelers — Maurkice Pouncey, David DeCastro, Alejandro Villanueva — all retired, were released, or signed elsewhere as free agents.

But through nearly two weeks of camp, Trai Turner has stepped up in that role for Green and the Steelers. A free agent signing to replace DeCastro at right guard, Turner has taken Green under his wing to get him ready for life as an NFL starting center. Steelers head coach Mike Tomlin has taken notice, offering praise to his new guard during camp Tuesday afternoon.

“It’s been good to watch him work and see that’s he’s a communicator. He’s embraced the stage that he’s in in his career. Although he’s new to us, he’s doing a real good job of communicating with younger players like Kendrick Green in terms of coordinating cohesion, and just talking general NFL football and life with him. Oftentimes you can see those two guys working after practice reviewing whatever transpired collectively between them during the course of a workday, and that developing relationship is being initiated by Trai. I appreciate that,” Tomlin said.

Turner is an ideal leader for Green. Not only is he Green’s neighbor on the O-Line this season, but Turner is someone who has been at the top of his position in the league. Though on his third team in three seasons now with the Steelers, Turner was a starter as a rookie, and has five consecutive Pro Bowl to his credit from 2015-2019 with the Carolina Panthers.

He is also the most senior member of the team’s line. In Green and fellow projected starters Okorafor, Kevin Dotson/Rashaad Coward, and Zach Banner, there is exactly one year of full-time starting experience in the NFL.

Turner, with his wealth of knowledge on a novice line, is going to be a veteran leader and mentor by default to whichever group of four players joins him in the lineup each week. But to Green especially, he is someone who can set the Illinois rookie on a path to NFL success, like many Steelers have done in the past for the leaders of today’s Pittsburgh roster.

“I expect him to do his job, and do his job well. I’m appreciative when I see him doing the things that add value to us in an intangible way, and he’s shown that,” Tomlin said. “He’s been a football lover, he’s enjoying the process, he’s getting to know his teammates, and he’s adding value to us in informal ways like that.”