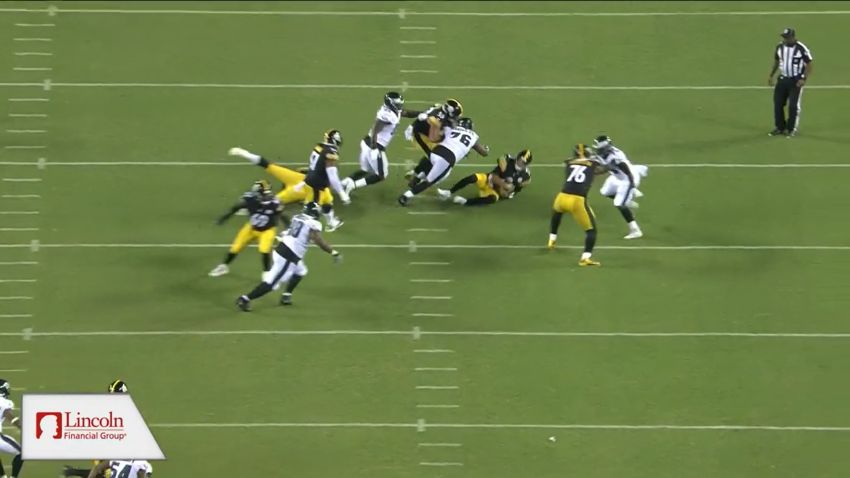 If you’re waiting for Pittsburgh Steelers’ rookie third-round center Kendrick Green to just step right in and dominate and own the position, then perhaps you’re going to have to wait another week. He had a bit of a rough game last night against the Philadelphia Eagles, which does boast one of the better defensive lines in the NFL, going beyond just the sack that he allowed.

That’s not to say that he is suddenly going to fall back and B.J. Finney or J.C. Hassenauer is going to be working with the starters, but it shouldn’t be a surprise if a former defensive lineman who didn’t play much center in college would have some transitional hiccups.

While it was his second game, it was his first lining up next to Trai Turner, the veteran, who has been something of a mentor to the young offensive linemen since being brought in after David DeCastro’s release in late June. Turner talked about what he’s seen from the rookie after last night’s game.

“The kid’s tough, he’s smart, he knows where he’s going. He’s making all the calls out there and just getting better weekly”, he said. “I think it’s growing pains, and there’s such a thing as good growing pains because a lot of things, you’d rather they happen now than happen later. You can learn from them, you can correct them now. So I think that’s what we’re going through and we’re just enjoying the process right now”.

After all, that is what training camp and the preseason are for. It’s all about getting you ready for the real thing, so if you make mistakes or struggle now, it’s a learning experience, rather than a drive-killer that snowballs into a loss.

I remain confident that Green is going to be a quality center. But to expect him to be flawless from day one is unrealistic, and certainly unfair. He’s going to have to be given the leeway to make mistakes and to have bad plays, so long as he is doing the job, on the whole, that he needs to do.

It will help to start to have some continuity along the offensive line again, and we’re getting close to it. With Turner and Chukwuma Okorafor in the lineup, that’s at least three-fifths of the projected starters. Zach Banner will probably be back on the field next week, and I’m betting Kevin Dotson is back with the ones on a full-time basis as well.