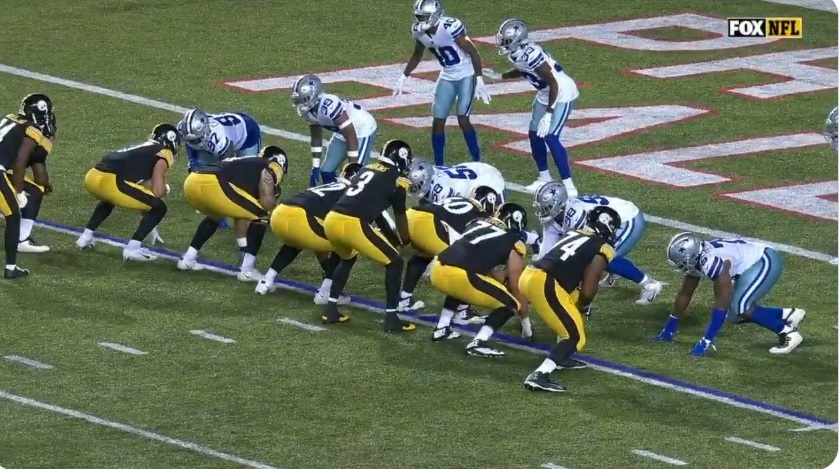 1. QB Competition Continues – With Ben Roethlisberger sitting this one out we got to take a good look at Mason Rudolph and Dwayne Haskins. Rudolph got the start and looked good. He was making good decisions, got the ball out quickly and threw a nice deep ball to Chase Claypool. Haskins seemed to dink and dunk a bit more but showed good mobility to get outside the pocket and extend plays. And Joshua Dobbs the forgotten man in this mix threw the only TD. I would give Rudolph the edge in this game but it is far from being over.

2. It Starts Up Front – I liked the aggressiveness shown by the offensive line especially early in the game and specifically on the right side. Kendrick Green, Rashaad Coward and Joe Haeg showed some nasty up front in the run game. It didn’t show up in the yards per carry statistic but you see the influence that Adrian Klemm and Chris Morgan are stressing in practice. Can’t wait to see when the get more regulars back.

3. Livin’ on the EDGE – It wasn’t against the regular Cowboys starters but the Steelers outside linebackers performed well. Starting with Alex Highsmith, we know he added some strength in the offseason but he also looks faster. Like surprisingly fast. Maybe he added speed, maybe the game has slowed down for him but he looked quicker in every aspect and his spin move is a weapon. Cassius Marsh chipped in with a strip sack, Quincy Roche got a sack and Jamir Jones made me take notice. He seemed a little out of control at times but was able to get plenty of pressure.

4. He Can’t Be Feeling Berry Good – He gathered a bit of a folk following after the draft and Pressley Harvin III didn’t disappoint. His first punt had good hang time allowing the coverage to pin the returner at the eleven yard line. His second punt was a 48-yard ball that stopped on a dime at the one. Punt number three was angled to the sideline and went 51 yards and out at the eleven. Punt number four was 49 yards and bounced off the returner and recovered. It’s preseason but that was a heck of a debut.

5. Special Shoes to Fill – The Steelers lost a couple of strong special team players in Jordan Dangerfield and Ola Adeniyi so some new faces will have to step up. It’s hard to tell with multiple players wearing the same numbers but it looked like Calvin Bundage or Trey Edmunds, Donovan Stiner and Shakur Brown twice had tackles on kickoffs and on punts Anthony Johnson and Mark Gilbert were showing up in coverage. Special team plays like that can really help make the roster.

6. Ballage Rolling Downhill – I was not a fan of Kalen Ballage coming out of college. He had then and has now a hop that he does after taking the handoff that I felt limits his lateral quickness. But if you need someone to go downhill, with power, he may be your guy. He got a monster block from Kevin Rader on his TD run and he powered through the rest. He had another effective run on short yardage. I think he can be a solid runner between the tackles and is going to push for a roster spot.

7. Random Defensive Back Thoughts – Antoine Brooks looked fairly comfortable. He was both aggressive and tentative in spots and once he gets fully confident I think he can fill the slot role. Justin Layne still looks confused. Nice job forcing a fumble but didn’t look good in coverage. Stephen Denmark is a big man. I’m not sure if he can play yet but he may be great as a red zone defender. Nice showing by Mark Gilbert with two pass breakups. Arthur Maulet looks small but can knife into the backfield to make tackles. Tre Norwood had a red zone pass break up and Stiner had the interception. Good to see the young players making plays.

8. Who wants more Sexton? – I am intrigued by him. In the stat sheet he didn’t do a whole heck of a lot. He did have one big punt return for 36 yards and looks to have that quickness and acceleration that could make him a future return man. Sexton did have one red zone target and made the catch on the throw from Josh Dobbs but he was out of bounds. He may need to stick around on the practice squad or else Bill Belichick may claim him.

9. Uphill Battles Ahead – There are some players who have been around for a few years that will have a tough time making this team. Ulysees Gilbert III had no pop in his pads and looked to be constantly late in coverage. Jaylen Samuels led the team in carries but was again less than two yards per carry. He’s just not dynamic in any area. And Jordan Berry should be a bit worried as well after Harvin’s first game.

10. One Hope for Harris – It may be asking a lot under the circumstances but my one hope for Najee Harris is the offensive line can gel and give him something to work with. They don’t have to be great. Harris gets extra yards after contact. He can find yards that aren’t there. He can win with speed or by putting a shoulder into the chest of defenders. Running backs generally don’t have long careers so you don’t want to see any wasted seasons. Harris can be special but he’s going to need some help up front.