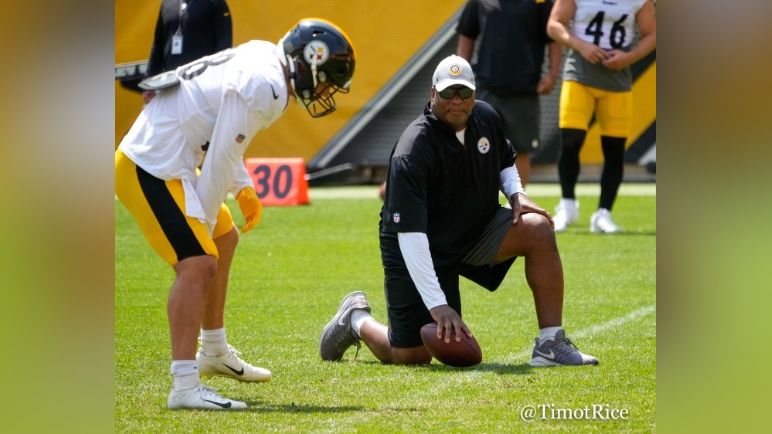 Pat Freiermuth’s yet to play in his first NFL game — that should come tonight — but he’s already making a strong impression on TEs Coach Alfredo Roberts. In a new episode of The Standard, the documentary series on the Steelers’ YouTube channel, Roberts was interviewed about the TE room and specifically, his new rookie draft pick.

“He’s shown things on the field that probably surprise us in certain areas. Being so efficient in the passing game. Some of the things he’s done we’ve said, ‘wow.’ As a blocker, he’s going to be a more than efficient blocker at this level.”

Freiermuth has enjoyed a strong training camp minus a minor shoulder injury that caused him to miss the Hall of Fame game against Dallas. But he returned to the next practice and is fully expected to make his NFL debut tonight versus the Eagles.

In practices, he’s caught virtually everything thrown his way, as evident by his 88.2% catch rate in training camp, hauling in 15 passes on 17 targets. Of the 12 players with 15+ targets, only four of them have yet to drop a pass in team sessions — Anthony Johnson, Rico Bussey Jr., Ray-Ray McCloud, and Freiermuth. Freiermuth’s catch rate is also highest on the team of those with 10 or more targets. He’s also shown to be a nuanced route runner, making up for a lack of elite athleticism, and is a more accomplished in-line blocker than most rookies who has finished his blockers better throughout camp.

Roberts went on to say he’s a big fan of the man on and off the field.

“Off the field, I think he’s a dynamic young man. I said early on in the process I thought he was serious but very, very fun.”

Few on the Steelers know Freiermuth as well as Roberts, who kept in close contact with him throughout the draft process. He was also the coach who put Freiermuth through his drills and routes during his Penn State Pro Day. Undoubtedly, he pushed the team to take Freiermuth with the 55th pick of this year’s draft.

Roberts isn’t the only one to praise him. So are his teammates.

“He’s a good buddy of mine now,” TE Zach Gentry said of Freiermuth. “We’ve gotten pretty close. I think he can do it all. He’s athletic, he’s flexible. He can really be put anywhere on the field. In-line, in the slot, out wide. He’s one of those guys that’s super smooth. He’s just smooth. He’s super smooth and athletic getting in and out of breaks. He’s really going to have a bright future. I’m excited for him.”

Steelers’ Nation’s excited for him too, already throwing out Muuuuuuuth calls during camp. With the way Roberts and others are talking him up, that’s something you’re going to hear plenty of in 2021 and beyond.