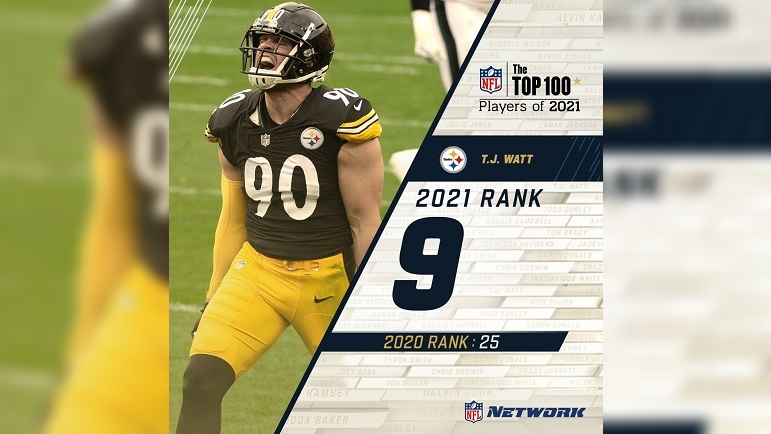 The NFL Network is now revealing players ranked 10-1 on Saturday as part their annual Top 100 rankings show and Pittsburgh Steelers outside linebacker T.J. Watt, as expected, is included in that group of ten players.

Watt is ranked 9th overall in the Top 100 this year after registering 53 total tackles, 15 sacks, 23 tackles for loss, 41 quarterback hits and an interception in 2020. Watt was also credited with seven passes defended and two forced fumbles in 2020. He was a legitimate candidate to win the 2020 Defensive Player of the Year award in 2020 but that honor ultimately went to Los Angeles Rams defensive tackle Aaron Donald.

Watt was originally selected in the first-round of the 2017 NFL Draft out of Wisconsin and to date he has registered 49.5 career sacks. The Steelers star pass rusher is expected to sign a contract extension in the next few weeks that will likely result in him becoming the highest paid defensive player in the NFL.

In total, the Steelers had three players ranked in the Top 100 this year as defensive tackle Cameron Heyward was 57th overall while safety Minkah Fitzpatrick was 52nd overall.