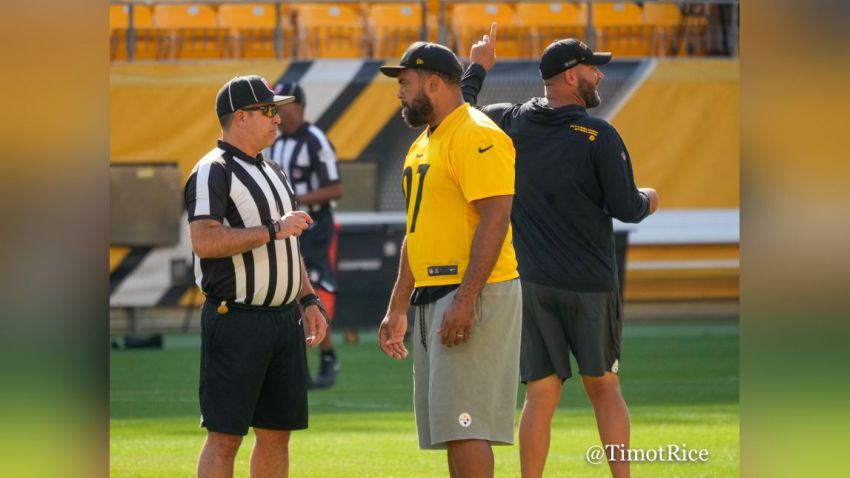 The Pittsburgh Steelers are set to play in their third preseason game, their first of the year inside of Heinz Field, and in front of more than a handful of their own fans for the first time since 2019. It’s clear that they are treating this as their tune-up game, and head coach Mike Tomlin is willing to consider anybody for participation who is willing to step on the field and play.

“We’ll have an open-door policy regarding participation”, he told reporters prior to Thursday’s final training camp practice. “We haven’t finalized participation to this point. All that are healthy will have an opportunity to play in the game. We’ll determine what level of health that is as we get closer. Just know that we’re inclusive in terms of our mentality in regard to player participation in this one”.

He was later asked specifically about veterans like Cameron Heyward and Joe Haden, to which he responded in the affirmative. Obviously, anybody who is not fully healthy or has not been practicing (such as Stephon Tuitt or T.J. Watt) is not going to be out there, but everybody else is free game.

To this point, All-Pro safety Minkah Fitzpatrick has not participated in the preseason, for example, nor have Haden or Heyward. Obviously, Watt, who is in the middle of contract negotiations, and Tuitt, who is being excused from participating for now as he continues to mourn the loss of his brother, have also not been on the field.

Offensively, the only absences of note have been quarterback Ben Roethlisberger and right tackle Zach Banner. Roethlisberger customarily would not play until the third preseason game, anyway, though Banner has been brought back along slowly as he finds his feet coming back from a torn ACL.

The real question will be how long we will see certain players on the field. Assuming that Banner does participate (he has even been subbed out for spells during practice by Dan Moore Jr.), it’s really not clear how many snaps he might play (and perhaps makes one wonder if he’s going to be prepared to play in the regular season opener).

Outside of starters, we should be getting a couple of players back from injury who missed time, particularly defensive back Antoine Brooks Jr., who is a frontrunner to start in the slot, as well as running backs Kalen Ballage and Benny Snell.

And then there is Chase Claypool, who left Wednesday’s practice with a minor ankle injury. Tomlin did not outright declare him out, but I’m not sure the odds are very high that he will be playing. We will know soon enough, though, one way or another.