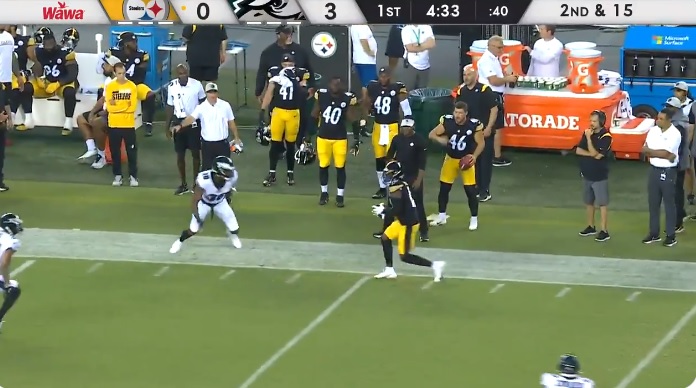 Winners and losers from the Pittsburgh Steelers 24-16 win against the Philadelphia Eagles Thursday night.

Jordan Berry: Berry’s not going away without a fight. His first two punts were excellent, downed at the Eagles’ two and seven, showing Pressley Harvin III hasn’t cemented the starting job yet. Harvin is probably still the favorite but Berry is making it a tougher decision. Perhaps the team can flip him the way they did Brad Wing years ago for a seventh-round pick. It also helped his competition, Harvin did not have a punt in this game. The Steelers didn’t punt in the second half.

Dan Moore Jr.: A nice showing for Moore, who held his own in pass pro working second-team left tackle and continues to show his athleticism, working out in space on wide receiver screens. His third-quarter drive after the Justin Layne INT was particularly impressive. Chukwuma Okorafor’s 2021 debut was a bit shaky too, making Moore’s performance look all the better.

Dwayne Haskins: Haskins may not have made a singular throw that left your jaw on the ground, but he was efficient and put the ball in the end zone. He showed zip on a tight-window throw to Cody White on the Steelers’ first TD, a two-minute drive that resulted in Anthony McFarland’s two-yard run. He followed that up with a ten-play, 75 yard drive to hit a wide open Anthony Johnson on a free play.

Jamir Jones: A couple of special teams tackles, a sack, another  a pressure/QB hit that led to an interception (granted, he came in unblocked), makes for a second straight impressive performance for Jones. Making the 53 will still be tough, especially after the Schobert trade (another LB spot cemented on the 53) but he’s gunning for a practice squad spot. And deserves to be given one.

Jaylen Samuels: A nice outing for Anthony McFarland too, but it felt like Samuels was creating more yards after contact. He found the end zone from a half-yard out and though it wasn’t flashy, it was effective. I’m as critical of Samuels as anyone and he was going against Eagles second- and third-stringers but still, a good performance.

Isaiahh Loudermilk: Another solid game for the Steelers front, but Loudermilk continues to stick out. He’s getting off blocks, chasing the ball, and batting down passes. He finished the game with a 1/2 sack and a pass deflection and took another step to securing his roster spot along a deep offensive line.

Robert Spillane: Spillane’s play was just OK tonight. But he’s not going to be happy when he checks his phone. The big reason why he’s on this list is for the Steelers’ trade for Joe Schobert, which will almost certainly send Spillane back to the bench. Spillane had a poor showing in the preseason opener but hasn’t had a terrible camp overall. But the Steelers either felt the need to make the move or the chance to jump on the opportunity to acquire Schobert.

Tre Norwood: Tough to put too much stock into one play and he got beat by a guy with legit 4.3 wheels, but Norwood got out-ran on Quez Watkins’ 79-yard touchdown. The Steelers got caught in a nickel blitz and didn’t do themselves any favors with poor angles to the ball, including Norwood’s, who’s not known for his speed and showed the lack of it there. The concern with him was a combination of small and slow, though his instincts and ball skills make him an interesting zone defender.

Cam Sutton: Not a tremendous showing for Sutton, who got beat far down the left sideline for a would-be touchdown, though the pass was just inches out in front. Sutton also got turned around on a catch later in the half. A high-IQ guy like him might suffer a bit in preseason action and not being able to adequately scout and gameplan for an opponent. But it was a “below the line” night for a secondary that doesn’t have a ton of speed.

Josh Dobbs: On a night where Mason Rudolph was adequate and Dwayne Haskins was good, Dobbs needed to capitalize on his fourth quarter chance. He didn’t. His first pass was forced into a blanket of Eagles and picked. With the Steelers likely playing their tune-up game next week, Dobbs’ next snaps likely won’t come until the finale against Carolina. Dobbs may be out of time to push for a roster spot.