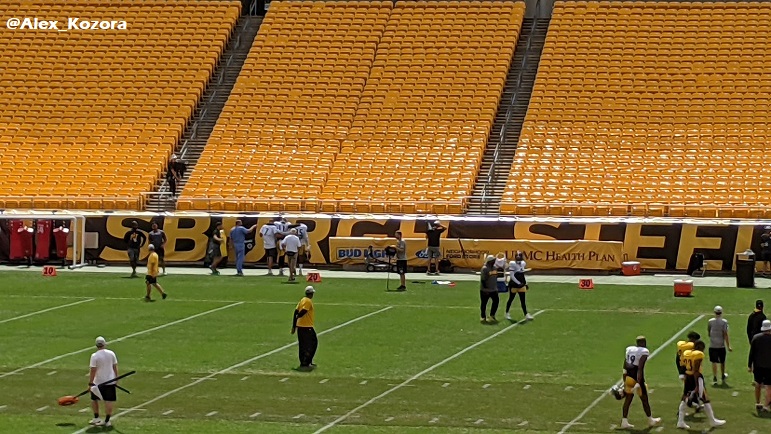 The Pittsburgh Steelers are wrapping up their Tuesday training camp practice at Heinz Field, and it looks like at least one key offensive player suffered some sort of injury late in the session.

According to our very own Alex Kozora, Steelers wide receiver Chase Claypool needed to be helped off the field late in Tuesday’s practice after landing awkwardly following him trying to make sideline grab. He was down for a little while before being helped off the field by quarterback Ben Roethlisberger and tight end Eric Ebron, according to Kozora.

Steelers head coach Mike Tomlin said after practice that Claypool is being evaluated at this point.

UPDATE: Mike Garafolo of the NFL Network reports on Twitter that Claypool did not suffer a significant injury in practice today.

In other news related to Tuesday’s practice, defensive back Antoine Brooks Jr. sat out again on Tuesday. Rookie center Kendrick Green was back for the Steelers on Tuesday after being excused by Tomlin the last two practices.

Third string tackle Chaz Green was also back at practice on Tuesday after missing Saturday’s session. Inside linebacker Marcus Allen was not in pads on Tuesday, unfortunately.

Defensive end Stephon Tuitt came out on the field in plainclothes right before the team started running 11-on 11 drills, while outside linebacker T.J. Watt also remains out of practice as he waits to get his contract extension done.

#Steelers WR Chase Claypool did not suffer a significant injury in practice today, sources say. Major sigh of relief for Pittsburgh. We’ll see what the resulting diagnosis is but definite relief after how it looked.