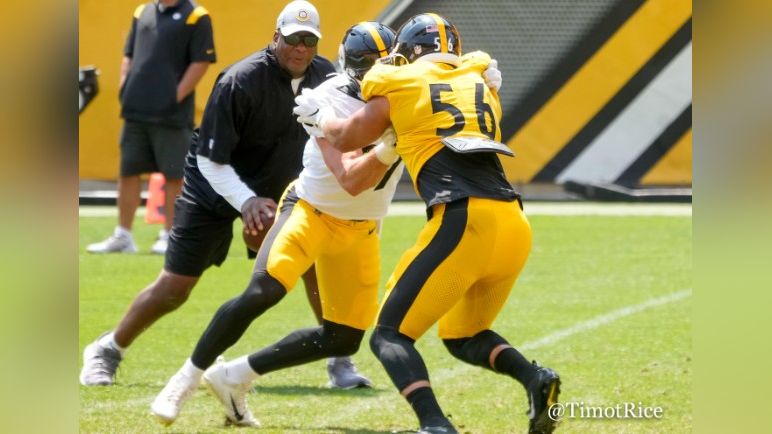 The Pittsburgh Steelers are expecting outside linebacker Alex Highsmith to make a huge jump in his second NFL season and so far during the team’s training camp, it sounds like he’s well on his way to doing just that in 2021. Highsmith’s big second-year jump, assuming it indeed happens, won’t be a result of him not working hard to improve several aspects of his game this past offseason. On Tuesday, Highsmith was a guest on SiriusXM NFL Radio and during his interview with Pat Kirwan and Jim Miller he talked about two main things he worked on quite a bit this past offseason in an effort to improve his overall game.

“From a physical standpoint, I feel like I definitely got a lot stronger this offseason, Highsmith said. You know, that was really just one thing for me, just improve my strength, you know, at the point of attack, being more stout at the point of attack and just really being able to set the edge better, because I can improve in all areas of my game. And so that’s just one of the areas that I really focused on.”

Getting stronger this past offseason wasn’t the only thing that Highsmith worked on these last several months, however, as the 2020 third-round draft pick out of Charlotte also made it a goal to get faster at the snap of the football.

“And also, just my get-off. You know last year I was kind of coming out a two-point stance when I first came in and stuff like that and I noticed and I look back at it now and I’m kind of disgusted about how slow I was getting off of the ball,” Highsmith said. “And I’ve worked a lot on my three-point stance, and you know, even my two-point stance still and I feel a lot faster this year coming off the ball. And so, that’s really just two things, really, just my strength and just my get-off.”

It will be interesting to see if Highsmith added strength indeed winds up helping him being stronger at the point of attack against the run in 2021, as that’s definitely an area of his game that he showed he needed improvement in during his rookie season snaps. Highsmith also needs to become a more accomplished pass rusher in 2021 as well, and that’s another area of his game that he admitted to working on this past offseason in addition to him getting stronger and being better on his get-off.

“And so constantly polishing my moves, polishing the moves that I have, adding new moves to my arsenal,” Highsmith said on Tuesday. So, I feel better in that aspect.”

The Steelers’ 2021 preseason opener is Thursday night against the Dallas Cowboys, so it will be interesting to see if Highsmith sees any action in that Hall of Fame Game contest, and if he does play, how many snaps he winds up logging after what he agrees has been a nice start of training camp for him.