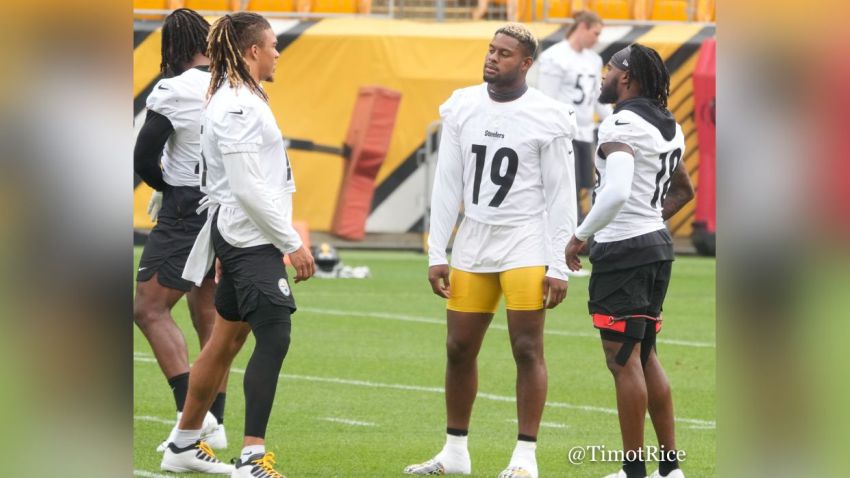 A lot of offseason buzz for the Pittsburgh Steelers went to the wide receiver position, first imagining how the depth chart would look after the draft and departure of JuJu Smith-Schuster, and then imagining how the targets would get split up between JuJu, Diontae Johnson, and Chase Claypool once the team surprisingly could afford to bring Smith-Schuster back as a free agent.

Until the regular season hits and Pittsburgh can show how it plans to use all of its talent at wide receiver within the offense, that topic is not going to disappear. Monday following training camp, Johnson was the latest receiver asked about the split. Like the others, Johnson felt he was good enough to be a No. 1 WR in the NFL, but knows he and his teammates are all going to get their looks in 2021.

“We got great receivers on the team and I try not to think about stuff like that,” Johnson said, after stating his belief he had the talent to be a No. 1. “We all gonna get our targets or whatnot, so I’m just doing my job and I get open Ben gonna look my way or whatnot. So we’re going to all eat at the same time so I’m not worried about it.”

Both Johnson and Smith-Schuster have shown the ability to be a No. 1 receiver in the NFL and for the Steelers. Claypool in his first season showed that he has the talent to grow towards that level, as well. The split that year went 97-88-62 in receptions (Smith-Schuster, Johnson, and Claypool, in that order), all three players had between 831-923 yards (led by Johnson), and all had at least seven touchdowns (Smith-Schuster and Claypool had nine).

That was in a short-yardage passing game that was a step back from the team’s prior seasons (not including 2019 when starter Ben Roethlisberger was injured). In an offense expected to take things up a level this season, the possibility for at least two if not all three players to threaten 1,000 yards exists.

Versatility has been a key word for how the offense is expected to feature those three under Matt Canada. None have expressed worry their targets will decrease. Instead, each has expressed admiration for the team’s group of pass-catchers, and focus on just being ready for the upcoming season.

“I’m sure they think the same thing,” Johnson said, of his fellow receivers. “I try not to think about that. I mean, at the end of the day, we all great players. We can all contribute to the offense, make good plays, get in the end zone whenever we want. Like I said, I’m just trying to worry about the little things that I need to worry about, you know? All that’s going to come at the end of the day.”