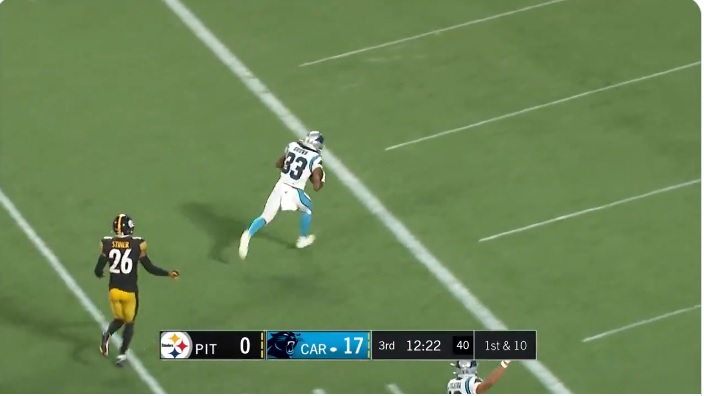 Not much went right for the Pittsburgh Steelers at Bank of America Field on Friday night, as they finished out their preseason with a 34-9 loss to the Carolina Panthers.

After a three and out on the Steelers opening drive, Pittsburgh’s backup defense got a chance against most of the Panthers’ starting offense. After some short completions by QB Sam Darnold and an 11-yard run by RB Chuba Hubbard, the Panthers got into Pittsburgh territory at their 48. A few plays later Carolina was looking at 4th-and-2 from the Steelers’ 20-yard line and went for it, but the Pittsburgh defense held strong and forced a turnover on downs when Darnold was chased out of the pocket by DL Isaiahh Loudermilk. His throw was incomplete to WR Robby Anderson.

The Steelers went three and out again on the ensuing possession, as RB Benny Snell Jr. only managed three yards on a second-and-10 run and QB Dwayne Haskins, who got the start, went underneath on 3rd-and-7 to WR Ray-Ray McCloud for a two-yard gain. The Steelers forced Carolina into a 3rd-and-6 on their next possession after a nice run stop by LB Robert Spillane, but an 18-yard catch and run by Moore on third down brought Carolina to the Pittsburgh 43-yard line. The Panthers would settle for a 53-yard field goal on the drive by kicker Ryan Santoso to put Carolina up 3-0.

On the first play of the Steelers’ third drive, Haskins’ throw was off the hands of FB Derek Watt and into the hands of Panthers’ DE Brian Burns for an interception. A sack by OLB Jamir Jones brought the ball from the Steelers’ 25 to their 31. Back-to-back Darnold incompletions later, kicker Joey Slye came out to attempt a 49-yard field goal and was no good, keeping the Panthers’ lead at 3-0. The Steelers picked up their first first down of the game on the next drive when Haskins connected with WR Chase Claypool for an 18-yard gain to the Carolina 42, but on the next play, Haskins fumbled the snap and the drive eventually stalled out.

The Steelers forced the Panthers into another punt, but WR Mathew Sexton fumbled trying to pick up a bouncing ball, and it was recovered by Panthers’ WR Keith Kirkwood at the Steelers’ 15-yard line. Two plays later, Darnold found WR Terrace Marshall Jr. on a screen and Marshall took it 13 yards for the touchdown. A Ryan Santoso extra point gave the Panthers a 10-0 lead.

The Steelers looked to finally have some life on offense. After an incompletion to WR Ray-Ray McCloud, Snell picked up 17 yards on a carry and then WR Chase Claypool gained 11 yards on an end-around, but the Steelers couldn’t move the ball from there and were forced to punt from the Carolina 46.

The Panthers got the ball into Pittsburgh territory again behind a couple nice plays from Hubbard, including a 14-yard reception and 12-yard run, as he finished the first half with 50 total yards. The Steelers got the Panthers to another fourth down, but Carolina converted the 4th-and-1 with a nine-yard completion to WR D.J. Moore. Darnold then found a wide-open Marshall for a 24-yard gain and Darnold hooked up with WR Robby Anderson on the next play for an eight-yard touchdown pass. Santoso’s extra point was good, and the Panthers ended the first half up 17-0. Darnold finished 19-25 with 162 yards and two touchdowns, while Haskins was 3-9 for 24 yards with an interception for Pittsburgh.

The Panthers received the second half kickoff and QB P.J. Walker replaced Darnold under center. Carolina picked up a first down on a 10-yard run by Spencer Brown on 2nd-and-9, and then Walker hit rookie TE Tommy Tremble over the middle for a 24-yard gain. The Walker-to-Tremble connection came through again for a 21-yard gain, and Brown ran for a 20-yard touchdown to put Carolina up 24-0.

Haskins remained under center for the Steelers’ first possession of the second half, and the Steelers once again went three and out. Carolina got the ball back and again drove into Pittsburgh territory, but back-to-back incompletions by Walker at the Pittsburgh 37 forced a Panthers’ punt.

QB Josh Dobbs got his first snaps of the game, replacing Haskins, but he didn’t fare much better with the Steelers’ offense in his hands, as Pittsburgh went three and out again. Carolina followed with a three and out of their own, and Charlton’s punt was again muffed by Sexton, but he was able to fall on this one for a loss of two yards.

RB Jaylen Samuels gained 13 yards on a catch-and-run, eight yards on a rush and then another seven on a reception before losing three on a rush attempt. A five-yard completion to Sexton was followed by a 12-yard scramble by Dobbs on third down to move the Steelers and Carolina territory. The Steelers couldn’t get past the Carolina 34, and K Chris Boswell knocked in a 52-yard field goal to give the Steelers their first points of the game, although they still trailed 24-3, which would be the score heading into the 4th quarter.

QB Will Grier replaced Walker under center for Carolina in the 4th, and he started off the quarter with back-to-back incompletions, as the Steelers forced a three and out. The Steelers followed with a three and out of their own, but Carolina got back on the board on their next possession. After Grier and Keith Kirkwood connected for a 15-yard gain, another 15 were added on after an unnecessary roughness by CB Mark Gilbert. On the next play, Grier scrambled for a 24-yard touchdown and the extra point put Carolina up 31-3. The Steelers’ offense was once again stagnant, leading to another three and out. On 2nd-and-9 on the next Panthers’ drive, DL Isaiahh Loudermilk had a fabulous bull rush and was able to get to Grier for a sack.

After a Panthers’ punt, QB Dwayne Haskins returned to finish the game out, but on his second play back under center, RB Tony Brooks-James fumbled and it was recovered by Carolina at the Pittsburgh 27. A Carolina field goal a few plays later put them up 34-3.

Haskins led the Steelers on a scoring drive, highlighted by two completions to WR Ray-Ray McCloud, one for a 28-yard gain and then again later for a 22-yard touchdown to cut the Steelers deficit to 34-9. Boswell’s extra point was no good, and the final score would end up at 34-9. The Steelers conclude this preseason with a 3-1 record. They’ll open Week One at Buffalo in two weeks.