Tuesday was quite a day for the Pittsburgh Steelers as the team cut their roster down from 80 to 53 active players. Those Tuesday transactions resulted in the team now having 56 players officially under contract with 53 of them being on the active roster. With the roster now cut and the Rule of 51 over with, we can now update the Steelers 2021 salary cap situation heading into Wednesday.

As previously mentioned, the Steelers currently have 56 players under contract for the 2021 season as three players, quarterback Joshua Dobbs, defensive tackle Demarcus Christmas and defensive back DeMarkus Acy are all currently on the team’s Reserve/Injured list. Christmas and Acy are both on the Reserve/Injured list on split salaries while Dobbs is on there at his full contracted amount. They all now count against the salary cap now that the offseason Rule of 51 has expired.

Including the active 53-man roster, all dead money and the three players on the Reserve/Injured list, the Steelers should now be roughly $15,982,912 under the cap entering Wednesday. The team did waive defensive back Antoine Brooks Jr. with an injury settlement on Tuesday so that amount that’s not yet know will count against the team’s 2021 salary cap as well. That amount should be known within the next 14 days and probably even less than that.

While the Steelers are currently nearly $16 million under the cap, they still have some forthcoming expenses that need to be budgeted for. For starters, roughly $3 million will need to go toward a 16-man practice squad. That practice squad should be set within the next 48 hours. The team also will likely want to have at least $7 million in available salary cap space for in-season moves and possibly even more than that. Like it or not, that needs to be budgeted for as well.

The Steelers are also still working to finalize a very lucrative contract extension with outside linebacker T.J. Watt, who is currently counting $10.089 million against the cap. There’s a good chance that Watt’s 2021 cap charge will rise whenever he signs his new contract. We’ll have to wait and see if any other players such as cornerback Joe Haden wind up signing a contract extension as well. It’s a plausible notion.

The Steelers 53-man active roster is likely to go through some changes in the next few days as well and those changes are likely to include a few free agents being added. The team should have plenty of salary cap space to spend on a few low-cost free agents or waiver wire claims.

I will provide another full salary cap update as soon as the practice squad is set. 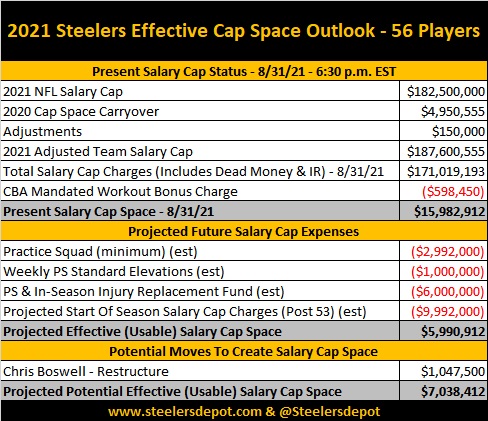