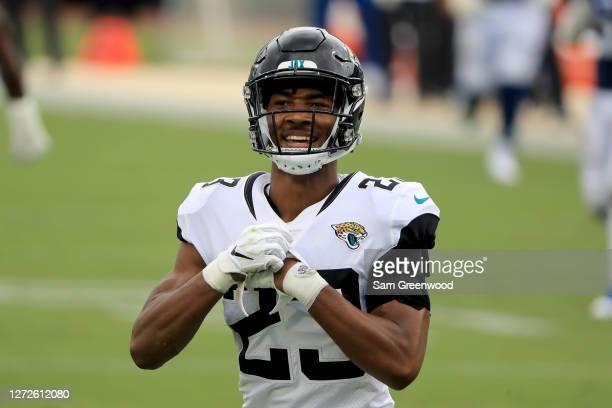 ESPN reporter Jeremy Fowler reported Sunday that the Jacksonville Jaguars would likely be willing to field calls in regard to a possible trade for CB C.J. Henderson. Henderson was selected 9th overall in the 2020 NFL Draft, being the second CB selected behind Ohio State’s Jeff Okudah who went 3rd overall to the Detroit Lions. The former Florida Gator was a highly-touted prospect coming I into the draft process, having a knack of getting his hands on the football in his short time in Gainesville and tested extremely well as the NFL Combine, measuring at 6’1, 204lb and ripped off a 4.39 40yd dash, a 37.5-inch vertical, and a 127-inch broad. Henderson has the size, length, speed, and explosiveness teams look for in a potential shutdown corner on the outside and has the tools in his toolbox to compliment his impressive athletic profile.

Here is a summary I wrote on Henderson before the 2020 NFL Draft after breaking down several of his games:

From his 1st game as a freshman against Michigan, one could see that C.J. Henderson had potential to be a cover man at the next level. He’s got all the tangibles you look for in a prototypical corner: Size and length, speed, quickness, and great acceleration. He has shown to be a quality defender in man coverage and that he can play in the big moments and not panic when singled up on receivers. However, he had many inconsistencies this year, particularly in zone coverage and with tackling/run support that raised more questions than answers. Henderson seemed worried about his draft stock this year when out on the field this season with all the hype around him, and it likely affected his play. He has all the tools to succeed at the next level as a boundary corner, but he needs to improve his consistency and commitment to the game. You can see the love for the game is there, and should Henderson be brought into a culture with established veterans on the defensive side, he should develop into a quality starting option within his 1st two seasons. Pro Comp: Byron Jones (Mid-Day 1)

Henderson’s first season in the league was met with some adversity. He only played in eight games in 2020 due to shoulder and groin injuries that eventually landed him on IR in November, starting all eight games played and recorded 36 total tackles (27 solo), six PBUs, one INT, and one forced fumble. Over the course of the offseason, Henderson has healed up from his injuries sustained in his rookie campaign but landed on the COVID list in July right before training camp, being activated off the reserve list two weeks later on August 6.

However, since then, it was reported that Henderson missed a scrimmage due to “personal reasons” and seems to be falling out of favor with HC Urban Meyer who since brought in rookie Tyson Campbell out of Georgia in the second round of the 2021 NFL Draft as well as Shaquill Griffin who signed a lucrative contract in free agency.

Perhaps there is some weight to the character concerns surrounding Henderson and his work ethic, but personally knowing Henderson during my time spent with the Florida Gators Football program back in 2018, I will attest that his passion for the game and his work ethic likely isn’t the issue. People often criticize Henderson for looking disinterested and not energetic on the football field, stating that he doesn’t love the game.

After personally coaching Henderson as a strength and conditioning coach for the Gators, I can tell you that this is his normal personality. Henderson is a mild-mannered, soft-spoken guy that mainly keeps to himself and works hard in the weight room as well as on the football field. He is extremely coachable and receptive to what others have to say. He takes pride in leading by example, often winning every sprint repetition we had the team run with his impressive burst and acceleration off the line, showcasing speed that was rare even for a SEC defensive back.

Thus, knowing who C.J. Henderson is as a person, what he is as an athlete, and what he can be as a football player, I would fully endorse the Pittsburgh Steelers getting Jacksonville on the phone to inquire about his availability. Now Henderson isn’t without his warts as a defender as I highlighted in his breakdown above. There are occasions where he allows too much separation in coverage, not showing a quick click-and-close downhill to contest the pass like we see here against #11 DeVante Parker of the Dolphins with a poor tackle attempt to follow.

He also occasionally loses position in terms of playing the football in coverage against the WR like on this rep against #15 Will Fuller on the sideline, overrunning the play and losing sight of the ball in the air, thus allowing Fuller to make the easy catch and turn upfield for the big touchdown run after the catch as he runs right off of the back of Henderson who was out of position.

While Henderson had his struggles as a rookie in coverage, we have to remember how hard of a transition it can be for at CB to go from covering college WRs to having to be on an island against some of the NFL’s best pass catchers every week. Despite his growing pains, Henderson was able to make a notable impact in his limited playing time in 2020. He showed the same knack for finding the football that he had at Florida, playing the ball well in the air like we see on this rep against the Colts, coming off of his man in coverage to jump the route underneath for the INT and takes it the other way for a nice return well into Indianapolis territory on their side of the field.

Henderson’s long arms and angular frame give him the opportunity to contest passes even when he isn’t in perfect position in coverage. On this play against #13 T.Y. Hilton, we see Henderson stay on Hilton’s hip pocket in coverage and break on the ball when Hilton runs the comeback route at the line-to-gain. Henderson leaps forward to contest the pass, outstretching his arm and wraps up Hilton with his opposite arm to force the incompletion for a vital fourth down stop.

As I noted above in my scouting breakdown on Henderson, one thing he needed to work on going from college to the league was his consistency as a tackler in run support. There were moments with the Gators where he would run through ball carriers, but he also showed moments where he would be an ankle biter or attempt to arm tackle a receiver rather than run through him. His play in 2020 has given me comfort seeing him improve in this aspect overall as well as give hope of further improvement going forward. Take, for example, this play against the Colts where Henderson sees the underneath pass on the drag route and triggers downhill quickly, breaking on the ball and rips #15 Paris Campbell’s legs from underneath him to keep him front getting the first down.

Here’s a similar play of Henderson in zone coverage against Green Bay in a Cover 3 look, seeing the ball thrown to #17 Davante Adams on the curl route and breaks on him immediately once he sees the ball thrown, smacking him in the back once the ball arrives and forces the incomplete pass.

Even when he is beat in coverage, Henderson shows his competitive demeanor to try and make a play. On this play against the Packers, we see Henderson in man coverage against Adams on the left sideline. Adams hits Henderson with the slant route to get a step of separation over the middle of the field and #12 Aaron Rodgers puts it on the money to Adams who turns up the field.

Henderson doesn’t give up on the play and chases Adams from behind, wrapping him up with his left hand instinctively goes for the ball with his right, punching the ball out which ends up being recovered by teammate #44 Myles Jack who takes the ball up the sideline for a nice return on the turnover. While you may want Henderson to be in better position in coverage to avoid the completion, his motor to stay with the play after the incompletion and force the turnover is a positive to see, especially when considering he is going the best in the game as a rookie and holds his own.

Henderson isn’t a finished product by any means as a football player and has a lot of development that needs to occur to scratch the surface of what he can be at the NFL level. However, he is an extremely talented corner, as phenomenal athlete, and a good kid in terms of personality and character. Pittsburgh pulled off the steal of the decade by trading for S Minkah Fitzpatrick, dealing a first-round selection in the 2020 NFL Draft to the Miami Dolphins. Since then, Fitzpatrick has established himself as one of the best safeties in the league, being named a two-time Pro-Bowler and a two-time first-team All-Pro since coming to Pittsburgh.

Could the Steelers have similar luck trading for another first-round SEC defensive back? That remains to be seen, but should the price be less than the first-round selection that was required to get Fitzpatrick, I would be all for making the move to acquire Henderson to pair with another former Gator defensive back Joe Haden and learn for him and Fitzpatrick as a likely contributor in 2021 and a possible long-term solution to the CB position in Pittsburgh.