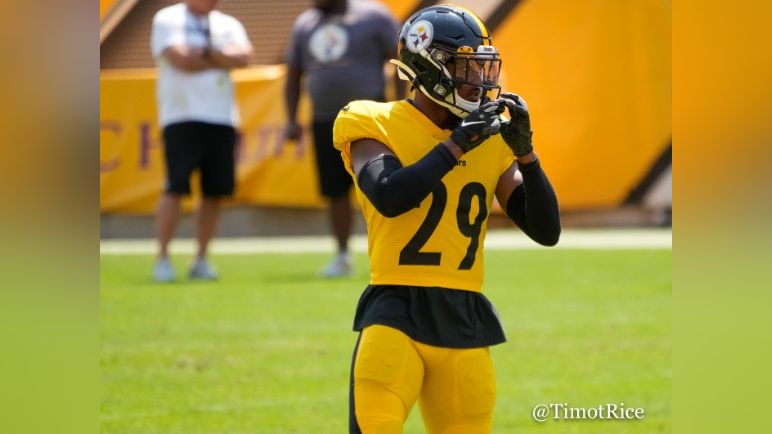 Preseason might not mean much to fans. But it means a lot to the players. And certainly to the coaches. The chance to see who brings it inside a stadium (that isn’t Heinz Field, anyway) versus ones who are just practice stars. No coach is standing ten feet away to hold your hand. The game is live, it’s fluid, and you better bring it.

Shakur Brown brought it Thursday. He recorded three tackles on kick coverage, all in the second half, and his physicality caught DC Keith Butler’s attention. After Saturday’s practice, Butler was asked about Brown’s performance.

“We look for, really, how they react in game-type situations,” Butler told reporters via a team transcript. “We’ve tried to cover as many game-type situations out here. If they’re doing it out here, usually they’re going to do it in a football game too. And that’s pretty much what’s happened with them.”

It’s one reason why the Steelers have arguably the most physical training camps in the league. They have to be the only team to be in full-pads and live tackling two days before their preseason opener against Dallas. I talked to a Cowboys fan and asked if Dallas had tackled at all at training camp. The answer? Not a chance. It’s like that in most other organizations. But Mike Tomlin and the Steelers are old-school, for better or worse, and aren’t afraid to hit.

Neither is Brown. An undersized, feisty corner in a similar mold to Mike Hilton, Brown has flashed his power in camp before the opening game, including a big stick on WR Mathew Sexton in a non-tackling session last week. Brown probably shouldn’t have brought Sexton to the ground. But it’s hard to tell a big hitter not to hunt.

For Butler, that’s the biggest thing he wants to see from any young player. If he doesn’t, that guy won’t be around long.

Brown had a relatively quiet game defensively but made a massive impact on special teams. Those three tackles plus a holding call drawn on a fourth coverage opportunity. That’s his path to the roster. Being physical and making plays on special teams. So far, Brown’s checked both boxes.