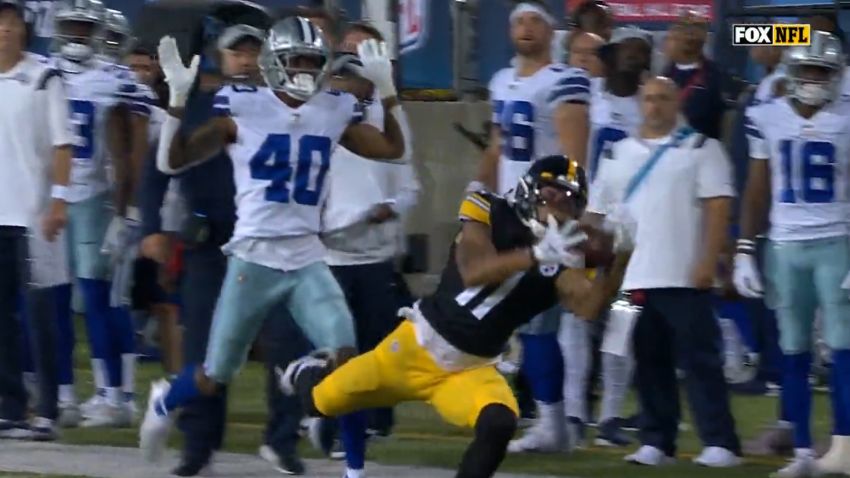 Even for a first preseason game, there weren’t too many sparks flying around the field in last night’s Hall of Fame game between the Pittsburgh Steelers and the Dallas Cowboys. At least outside of turnovers, the real big play came between Mason Rudolph and Chase Claypool, who caught a nice 45-yard pass before checking out of the game.

That play came about 20 minutes into the game, with the Steelers facing a third and four from their own 26. To hear Rudolph tell it, they made the mistake of leaving the second-year wide receiver in one-on-one coverage, a gamble he was happy to take.

Another look at Claypool from Mason #Steelers pic.twitter.com/xT2fRYII1u

“Just one high safety look. Anytime you can get Chase one on one with a defensive back, I’m gonna take that every time”, he said of what he saw on that play, though he also emphasized the strength of the entire group. “He keeps making plays, and he as well as all of our receivers can make those plays. They can get on the field. We know we’ve got a lot of guys that can run by people. It was good to see him make a play, but all of those guys are capable”.

A second-round pick out of Notre Dame in 2020, Claypool had an impressive rookie season, catching 62 passes for 873 yards with nine receiving touchdowns. He also had two rushing touchdowns, and no doubt the Steelers will continue to feature him in the motion game. He caught another two touchdowns in the Steelers’ lone postseason game.

Claypool has the potential to vault himself into the Steelers’ clear number one receiver this year, and even one of the best receivers in the league, at least if we go off of his talent and potential. Overall, he caught three of four passes for 62 yards, though the one he didn’t come down with was a drop that would have converted down the field on third down.

But to Rudolph’s second point, he is also just one in a fairly deep stable of wide receivers including JuJu Smith-Schuster, who did not play last night, as well as Diontae Johnson and James Washington. They put up strong numbers as a group last season, and figure to do so again this year.

Depending upon how much attention guys like Johnson and Claypool demand. They and Smith-Schuster all were targeted 100-plus times last year, which isn’t always easy to manage, but at the end of the day, it’s a problem you’d rather have than not.