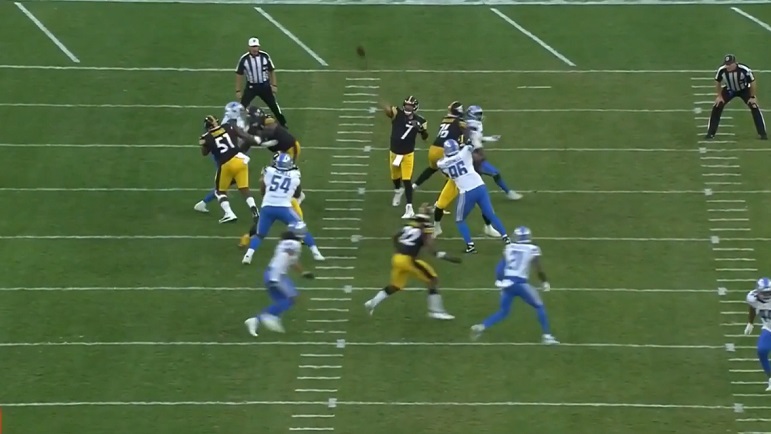 Pittsburgh Steelers veteran quarterback Ben Roethlisberger made his 2021 debut Saturday night in the team’s preseason game against the Detroit Lions and the 39-year old exited the contest after 16 plays and with a perfect passer rating of 158.3 after completing eight of his ten pass attempts for 137 yards and two touchdowns. Perfect quarterback rating and all, Roethlisberger still wasn’t entirely happy with his overall performance and most notably with his longest pass completion of the game, a 46-yarder to wide receiver Diontae Johnson near the middle of the field on third and three from the Steelers’ own 25-yard line.

“And the deep ball to Diontae, I didn’t like the throw,” Roethlisberger said after the game. “I think I put too much air on it. Luckily for me, he’s a heck of a football player. He made a play for me.”

It’s funny that Roethlisberger said that after the game as I wrote on Twitter right after the completion was made to Johnson that I thought that pass hung in the air a little too long for my liking. Personally, my first thought while that ball was in the air was that it was likely going to be intercepted. It wasn’t, however, as Johnson made a nice adjustment on the floated football and caught it right before the closest Lions defender arrived.

Ben lofted one MOF and Diontae got it. Ball hung forever #Steelers

From where Roethlisberger released the football, it traveled 47 yards to Johnson. Had he put the pass a little more on a rope and about five yards longer, Johnson probably would have caught in stride for a touchdown.

While Roethlisberger wasn’t happy with his one deep throw to Johnson in the game, at least it found its mark. In total, Roethlisberger registered an intended air yard average of 9.5 yards and an average completed air yard distance of 9.6 yards. By the way, both of those numbers are fantastic and yes, they are both heavily skewed by his long pass attempt to Johnson.

Roethlisberger’s two best throws of the game against the Lions were probably the two he threw to rookie tight end Pat Freiermuth for touchdowns. Both of those passes he threw where only Freiermuth could catch them and one of them followed a tremendous pump fake.

More than anything else, Roethlisberger made through his first NFL action of 2021 injury-free. He also took a hit or two in that game against the Lions and he said during his post-game press conference he’s glad that that part of the process has now been achieved

“I got one hit, which is good,” Roethlisberger said. “I always like to get one when the ball’s at least gone out of my hands. But all in all, it feels good to be out there and do that.”

And as far as how Roethlisberger’s arm felt after attempting 10 passes against the Lions?