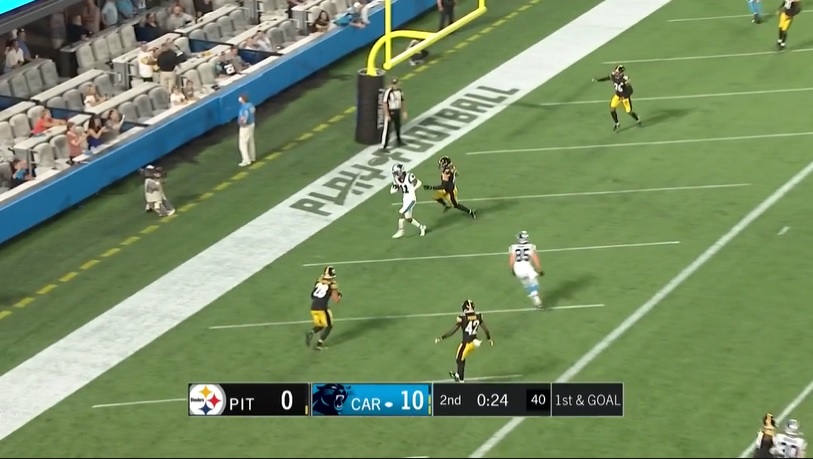 The summer of 2021 has been one Robert Spillane probably would like to forget. He didn’t have a particularly good training camp and got pushed down from starter to backup once the Steelers traded for Joe Schobert. Spillane has held his own against the run — that’s generally been less of an issue of his game — but in coverage, he’s struggled.

According to our charting, Spillane has been targeted 13 times throughout the team’s four preseason games. He’s allowed ten catches for 119 yards and one touchdown, a QB rating against of 130. Those are the numbers. Now let’s look at the tape.

I’ve put together a compilation of the ten catches we’ve charged Spillane for this preseason. They’ve come in different situations, man, zone, on a running back, tight end, and wide receiver. So hopefully this cut-up will provide more context than just the data.

The tape might paint a slightly more forgiving picture than what the numbers suggest. But not by much. It’s hard to fault Spillane for the TD he allowed to WR Robby Anderson. It at least came in the red zone where there’s less space for a linebacker to cover.

Consistently though, Spillane simply lacked the foot speed to be able to close on routes, tackling from behind rather than being able to play the catch point. He also struggled with footing and balance, slipping or tripping up which only compounded his lack of athleticism.

To be fair, here are the three incompletions we have him credited for.

Two decent reps against the Cowboys and Eagles, his patience on the RB angle route against Philadelphia was nice, with the Lions’ incompletion being much more on the QB than what Spillane did.

In aggregate, the bad outweighs the good. And it’s one reason why this team brought in Schobert to be the starter next to Devin Bush. Now, it’ll be on the Steelers’ coaching staff to avoid putting these guys in bad matchups like they have in years past and at times, did throughout the preseason.